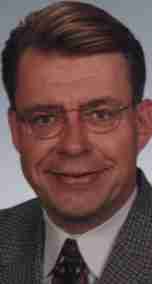 Training leaders for tomorrow’s church is a mission Lord of Life Church in Ramsey, Minnesota, takes seriously. The emphasis is not limited to leaders for its own congregation. Under the direction of senior pastor Blair Anderson, this rapidly-growing congregation in the northwest Twin Cities metro area sponsors two programs aimed at developing leaders for growing churches — “Leading Tomorrow’s Church” and “Mentoring Tomorrow’s Church.”
The “Leading Tomorrow’s Church” conference is scheduled for April 30 through May 2 at the church located at Hwy 47 and Nowthen Blvd. NW. Attendance is expected to run about 250 registrants, bolstered by about the same number of members of the congregation for evening sessions of the three-day event. Some congregations have sent delegations of up to 10, and many return for the conference year after year.
Pastor Anderson characterizes the conference as having been “born to help medium-size churches get a Great Commis-sion orientation.” Given current U.S. church attendance trends, he says, “We’re going back to an apostolic mode where we’re missionaries in a pagan land.”
Conference brochures go out to churches of 200 or more worshipping members throughout the five-state area. The theme for this year’s conference is “Moving from Maintenance to Mission.”
Pastor Anderson feels strongly about training leaders for the church, saying that traditionally the Lutheran church has been strong on teaching and shepherding skills, based on its German/North European roots. He contends Lutherans have not validated strong leadership. And, strong leadership lets congregations pursue the great apostolic commission of “making disciples …”
An advocate of the staff-driven church model, he says many churches get bogged down in committees composed of well-meaning people, coming from different backgrounds and with divergent priorities. He believes too much reliance on committees impedes progress and church growth.
This year’s leadership conference features: Brennan Manning, a nationally-known leader in evangelization and parish renewal; Dr. Tony Campolo, professor of sociology at Eastern University, radio and television personality, and counselor to U.S. Presidents; and Dr. Dennis Hatfield, a senior analyst and executive director of leadership research and education for Gallup International Research and Education Center. Ken Medema, Christian song-writer and recording artist, is also a part of the conference team, along with Lord of Life staffers who lead many of the workshops and congregation members who provide hospitality as well as attend sessions themselves.
Conference workshop topics are: Adult ministry and small groups, youth ministry, kids ministry, volunteer programs, leadership, the spirituality of a leader, prayer, worship, church administration, church marketing/evangelism, staff growth/ management and governance.
Pastor Anderson considers the conference a “gift” from Lord of Life. Though there is a conference registration fee, the event has yet to break even. Last year’s conference received $10,000 in out-of-pocket support from the congregation.
An adjunct to the conference is a program called “Mentoring Tomorrow’s Church,” held the first week in December. It involves a two-year commitment to three to five congregations selected by Lord of Life. Leaders of selected congregations have their work cut out for them. They are required to put together a strategic plan including congregational demographics, births/deaths per year, new members received and percentage of total support coming from the top 20 household units. In return, they get a mentoring program that explores new paradigms for governance, administration, staffing and programming.
Lord of Life congregation is an example of implementing the Great Commission [read Matthew 28]. Founded in 1973, it is one of the fastest growing congregations within the ELCA. Under Pastor Anderson’s leadership since 1986, the congregation has grown from 700 to 2,800 members, with an average weekly worship attendance of nearly 1,350. The annual budget has grown from $187,000 to over $2 million and a staff of 50.
Speaking of his congregation’s growth, Pastor Anderson says, “We’ve been able to reach more people by emphasizing seeker-sensitive worship, small groups, innovative youth and children’s programs, a multidimensional pastoral care system, a solid prayer ministry and a staff-driven administrative structure which undergirds and supports the entire ministry.”
Lord of Life has just completed a major facility expansion. It went from 25,000 sq. ft. under roof to 75,000. A major element is a gymnasium housing three full-size basketball courts. “We hope to recruit community groups — from senior citizens to kids — and have our gym in use 70 hours a week,” said Anderson.
The addition includes a stage and roughed-in space for a commercial-scale kitchen. Another feature is extra wide hallways allowing people to gather rather than feeling “pushed out” after worship and other functions. Anderson says that an enlarged sanctuary is also needed. But, for now, he preaches at a Saturday evening service and four Sunday serv-ices to accommodate the worshipping family of Lord of Life.
Lord of Life’s church campus has a roadside sign merely proclaiming “Lord of Life.” Asked about the lack of denominational designation, Anderson commented: “A lot of churches just look at the percentage of Lutherans in the general population and figure they’ll get their share along with other Lutheran congregations nearby. That’s a ‘maintenance’ stance; we aim to reach out to the broader community.”
That includes those he describes as “tuned out, turned off, disenfranchised and disillusioned.”