REJECTING MEGACHURCHES, THESE LUTHERANS ARE BUCKING THE TREND 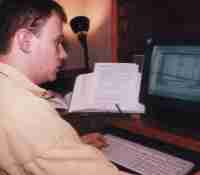 The Rev. tom Hilpert prepares a sermon for the cell church he leads.

It’s possible to worship god in a living room