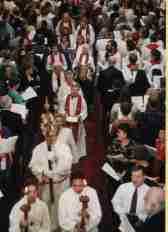 A St. Paul, Minnesota, ELCA congregation ordained its pastoral minister and then installed her as one of its two pastors in late April, both in defiance of its national church body’s rules governing pastoral ministry.
Anita Hill had served on the leadership team at St. Paul-Reformation Lutheran Church for a dozen years, but not as an ordained pastor. Following a course of study United Theological Seminary in suburban New Brighton, Minnesota, Hill, who is living openly in a committed lesbian relationship, was ordained on April 28. Anticipating an overflow congregation, planners moved the service to nearby Redeemer Lutheran Church, where the worship space is larger.
In fact, more than 1,000 people showed up, including three retired Lutheran bishops, one from Sweden, a bishop currently serving in the ELCA, at least a dozen members of the ELCA’s national staff, and nearly 200 ordained pastors, three-quarters of which are on the ELCA clergy roster. There was not room enough in the church building for the crowd.
At the point in the service when the clergy, standing six deep, laid hands on Hill’s head for the traditional ordinal blessing, the congregation erupted in cheers and applause which continued for several minutes. Participating bishops included Krister Stendahl, the retired bishop of Stockholm, Sweden; Lowell Erdahl, former bishop of the St. Paul Area Synod; and Bishop Paul Egertson, currently serving as bishop of the ELCA’s California West Synod.
Egertson said of the act of ecclesiastical disobedience, “We can’t continue excluding a whole class of people from the ministry.” Erdahl supported the action with an allusion to the beginnings of Lutheranism. “I follow Martin Luther,” he said. “All I can say is, ‘Here I stand.’”
The April 28 ordination is not the first of its kind for the ELCA. Previous unauthorized ordinations of openly gay and clergy have been solemnized by local congregations in San Francisco, California, and in northern Missouri. In all cases bishops responsible for the congregations have struggled to balance pastoral sensitivity with obedience to the denomination’s broken rules.
St. Paul Area Synod Bishop Mark Hanson has not indicated whether he intends to discipline the congregation for its action. Just days before the ordination, the St. Paul Synod Assembly, in its regular annual meeting, passed a resolution asking Hanson and the Synod Council not to move quickly to discipline St. Paul-Reformation Church. In another resolution, the body asked the ELCA to consider changing its rule against ordaining candidates living openly in committed gay or lesbian relationships.
An Associated Press story released May 24 reported that Bishop Paul Egertson had been asked by ELCA presiding Bishop H. George Anderson to resign because of his participation in Hill’s ordination. Egertson, whose son is gay, said he hasn’t decided whether to comply with the request. His term expires August 31. He is not expected to seek re-election.