"Peace to all who enter here!" 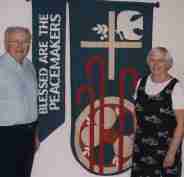 Lowell Erdahl, left, and spouse Carol, with a peace banner they display in their home.

Bishop Emeritus Lowell Erdahl of the St. Paul Area Synod didn’t need consultation on post-retirement activities when he was approaching the end of his term of office and retirement. He’s devoting considerable time and energy to one of his passions: promoting peace education through World Citizen, Inc., of which he is president.
For Erdahl it may have been a logical step from resolving occasional conflicts in the St. Paul Area Synod to promoting conflict resolution in the interest of world peace.
World Citizen, Inc., which is headquartered in St. Paul, has this mission statement: “To involve as many people as we can, starting with children, in activities that promote a peaceful, healthy world.” Among its programs are:
* International Peace Sites (including schools and homes);
* the Nobel Peace Prize Festivals held annually at Augsburg College; and
* peace education.
World Citizen has as its goals: a world without war; and Challenging and supporting teachers, students and parents to be lifelong peacemakers
In keeping with their peace commitment, Erdahl and his wife Carol have dedicated their Roseville home as a “Home Peace Site.” A plaque affixed during a brief dedication ceremony, attended by about 50 persons, occupies a prominent place in the home’s front hallway.
In Erdahl’s words, “Peace is not absence of conflict; peace is the non-violent resolution of conflict.” He continued, “We intend our home to be a place for peaceful, non-violent conflict resolution and global perspective in our neighborhood, nation and world.”
Erdahl reflects with a chuckle how he and his wife were members of the debate team at St. Olaf College and that debate continues in their home, albeit with peaceful resolution. “We try in our lives together to exemplify peace,” he added. He notes that as of June there were 207 Peace Sites in Minnesota alone, including a growing number of Home Peace Sites. There are over 750 Peace Sites in the world.
Home Peace Site dedications include the following commitments:
* to promote peace within ourselves, in all our relationships and in all the world;
* to challenge and support students and teachers to be lifelong peacemakers;
* to oppose violence as an acceptable means of conflict resolution and to work for a world without war;
* to affirm the world citizenship we share within the human family;
* to encourage intercultural understanding and the celebration of human diversity;
* to protect and preserve the earth as the home of humanity and all living things;
* to involve as many people as we can, starting with children, in activities that promote a peaceful, healthy world.
While Peace Sites in schools and homes and the Peace Festival are important, the peace education project holds the most promise, Erdahl says.
He notes that with 28,000 high schools in the United States, 78,000 elementary schools and 3,000 colleges, few other opportunities for decreasing violence are greater than peace education: systematically teaching the literature of peace and techniques of conflict resolution in every grade in every school.
“Reaching one child is important, but we hope the peace education program can spread and become part of education in every country in the world,” Erdahl said. “It has implications from resolving playground conflict to the whole human family.”
The Erdahls have carried their message of peace around the world, including several weeks in China with the Concordia Language Village program of Concordia College in Moorhead, Minnesota. They were impressed by the number of Chinese students who study English, observing the peace-promoting benefits of knowledge and communication.
The bishop emeritus is a twin brother of former U.S. Rep. Arlen Erdahl. The former bishop laughs that his twin brother is “15 minutes older but looks 20 years younger.” Lowell Erdahl’s education began in a one-room country school in southern Minnesota and continued through St. Olaf College, Luther Seminary and Union Theological Seminary. He served Farmington Evangelical Lutheran Church before joining the faculty of Luther Seminary (1958-1973). He served as senior pastor of University Lutheran Church of Hope from 1973 to 1983, when he was elected bishop of the Southeastern Minnesota District of the old ALC. He served in that position until 1988, when the ELCA was formed and he became bishop of the St. Paul Area Synod.
Carol Erdahl is a former school librarian and co-owner of the Red Balloon Book Shop on St. Paul’s Grand Ave.
Additional information about World Citizen, Inc., and its programs is available by calling 651-695-2587 or at the web site www.peacesites.org