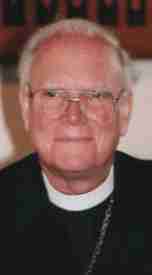 As the ELCA moved toward election of a successor for H. George Anderson, Metro Lutheran’s editor sat with the retiring presiding bishop and asked him to reflect on his six years in office.
Metro Lutheran: Before you were elected you were what many would call a “reluctant candidate.” Now that you’re completing your term, how do you feel about having served in this office for six years?
H. George Anderson: It was a surprise gift, really. I was 62 and thought retirement was “my right.” I didn’t know if I’d have the stamina to do it. When people pray for their bishop they may not know what benefit that really provides.
What, in your judgment, is the current state of the ELCA. Is it a healthy church or a dysfunctional one?
The history of the church has always been one of living with tensions — trying to be faithful to traditions and trying to stay faithful to the Gospel. It’s been true all through church history. I don’t think arguing with ourselves is dysfunctional.
Do you have any regrets or second thoughts about the recent ecumenical initiatives which the ELCA has approved? Is the denomination perhaps paying too high a price for having entered into them? [See news story, page 3.]
I think we’ve experienced “birth pains” in our church over this. We still are experiencing them. But we now have over 40 new ministries, all enabled by the ecumenical agreements we’ve completed with non-Lutheran Christian groups.
The WordAlone movement is not going away. Are you concerned about its existence, and how do you think the ELCA at large should respond to its concerns?
Naturally, It’d like us all to be on the same page. But tension in the church may be one way to keep us all honest. So far this year [as of early June — ed], WordAlone sponsored initiatives at synod assemblies have had less success than they have in previous years. I believe the church will survive the conflict. Some congregations have taken steps to leave the ELCA. But the process takes a long time. There has been some financial impact, but not as bad as it might have been.It saddens me, because ministry suffers.
People say they want to send a message. But the message they send would have to be responded to by the ELCA Churchwide Assembly, not by boards and ministries.
Mainline denominations, including all Lutheran bodies, are flatlining in membership. ELCA, LCMS and WELS all lost members last year. Realistically, what do you believe is the future of Lutheranism in North America?
Statistically, one-third of our congregations are growing. The message [of the Gospel] is not defective. But where people have been “merely cultural Lutherans,” when they move, they often leave the church. We need to have a ministry in contemporary culture.
But as Lutherans, we do have a challenge. We’re good at nurture but not in speaking to the general culture. The ELCA “Identity Project” shows a sharp uptick in recognition of the name “Lutheran” after five years of publicity campaigns. Congregations need to establish a climate for growth, and then be ready to adapt to make it happen.
What is the most significant change you’ve witnessed in the life of the ELCA during your six years of leadership?
Our concluding full-communion agreements with five groups, and the joint declaration with the Roman Catholic Church. Roman Catholic leaders give mixed signals about the Joint Declaration on the Doctrine of Justification, but those of their theologians with whom I talk say the agreement has great value. The Roman Catholic Church seldom speaks with one voice on an issue.
What were you able to accomplish in your tenure as presiding bishop which gives you great satisfaction?
Challenging the church to take a new look at people living in poverty, and the n getting the church to pick up on that. We’ve learned that people in poverty have gifts to share with us.