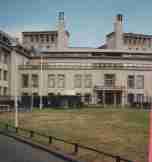 Tristi Wilson, a member of Lutheran Church of Christ the Redeemer (ELCA), Minneapolis, served as contract administrator for the International Criminal Tribunal for former Yugoslavia (ICTY) in the Hague, Netherlands, and the International Criminal Tribunal for Rwanda (ICTR) in Arusha, Tanzania.
“It was quite an experience working with the United Nations, with tribunal legal counsels and other officers,” says Wilson, a lawyer with West Group, Eagan. Her title at the time was Director of Judicial Relations, West Group.
“I felt privileged to be a part of the project because it felt like being a part of God’s work,” Wilson says. Her reference is to bringing to justice the perpetrators of genocide in Rwanda in 1994 and in the former Yugoslavia throughout the 1990s.
Wilson’s participation came as West Group contracted with the U.N., making a gift to ICTY and ICTR of Westlaw®, the group’s online legal research service.
Wilson’s role in both locations was training legal staff in the use of Westlaw, collaborating with technical and support staffs, and contributing to the publication of the tribunals’ opinions through Westlaw. The latter project is still in progress.
“I was bringing tools to the tribunals for them to do their work more efficiently and effectively. It felt like being in the forefront of laying groundwork for international criminal law.”
Due process, for example, has been a part of America’s judicial tradition for 200 years, but one of the judges told Wilson, “This is like 1776 [for us].”
Wilson believes the most lasting contribution of ICTY and ICTR will be the globalization of criminal justice. “A permanent International Criminal Court is on the horizon.”
Genocide, along with rape and sexual assault, were on the docket of both tribunals. In the case of the former Yugoslavia, there was violence between Serbs and Croats, Croats and Muslims, Serbs and Bosnian Muslims an instances of various other ethnic violations as the nation split into several provinces.
“The tribunals are convicting individuals charged with war crimes,” Wilson says. “Genocide, for example, is more than murder. It is the attempt to eliminate an ethnic group, and therefore a war crime and very hard to prove.
“Rape was used as a tool of genocide. Women were raped, then ostracized as an intentional way of eliminating them from their race’s gene pool. Children born to them were of mixed race, not ‘ethnically pure’ by the perpetrators’ standards.”
ICTY and ICTR convictions for rape as a war crime are significant, according to Wilson. “This is one of the first convictions of rape by a war crime tribunal. Predecessors of ICTY and ICTR were the war crime tribunals in Nuremberg and Tokyo in the 1940s. Although there was evidence of rape and sexual assault at that time, it wasn’t pursued in Nuremberg or Tokyo.”
In May 1994 a campaign of genocide was waged in Rwanda by the Hutu elite against the Tutsi minority and moderate Hutu. Eight-hundred-thousand people were murdered. In the former Yugoslavia numbers of victims are still being researched, Wilson says, and the number of defendants on trial is around 40.
At the Hague, security was tight compared to Tanzania. “You went into a separate building where you surrendered your passport. You went through a two-door passageway where the door ahead didn’t open until the door behind was closed. Witnesses were behind a screen, and voices were purposely obscured.”
Normally there were three judges, wearing red robes. “I remember looking hard at the defendants. Wearing suits and carrying briefcases, they just looked like ordinary men.
“At the end of the day, half the men could walk away. They were the lawyers. When the other half, the defendants, stood up, they were in shackles, yet they looked so ordinary. It’s the ‘extraordinary ordinariness’ of evil that is striking.”
The trial of Rwandans in Arusha witnessed by Wilson was more procedural than in the Hague, concerned with the admission of documents into evidence. From a legal standpoint, Wilson says, “It was quite dramatic, because these were important pieces of evidence.
“I was involved in training, making presentations to prosecutorial staff, staff attorneys, judges and administrators. Our company was able to provide the tools, and the staffs were anxious to use the state-of-the-art legal research tools, thereby bringing the highest credibility to the work of the tribunal.” Wilson trained classes in English, French and Swahili, using interpreters.
In Arusha, “there was a different infrastructure. The training room was close to the trial and near an active hallway leading to the holding area. A guard with a machine gun was outside my training room at all times.”
Personnel, however, were congenial. Once when Wilson gave her name to enter the building, the reply was, “We know you. You’re the American passport.”
Security on the streets of Arusha could have been a problem. Wilson had a car and a driver, James, nicknamed “Halleluia,” to bring her from her hotel to the tribunal. While in Arusha she also visited Makumira University College, formerly a Lutheran school of theology.
West Group, a 125-year-old firm that moved to Eagan from St. Paul nine years ago, employs a staff of 8,000, including 1,000 lawyers of whom Wilson is one. She has been with West Group for 18 years.
Wilson was recognized last year by the National Association of Women Judges with its annual award to a noted woman in the field of law and justice. The previous winner was then U.S. Attorney General Janet Reno. Accepting her award in Los Angeles, Wilson spoke about her work with the two international criminal tribunals.