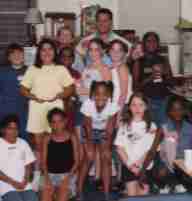 Kent Kaiser spent a week as an LCMS ambassador

A couple of my friends had done week-long mission trips to Central America each year under the auspices of their churches, always returning with interesting stories. They suggested that I, too, might make a good missionary.
Encouraged, I inquired to the Lutheran Church—Missouri Synod (LCMS) World Mission Office about the availability of short-term volunteer missions through our church. There were no qualifications explicitly stated, and the positions available seemed limited only by one’s imagination.
Shortly after completing the application process, LCMS World Mission staff contacted me with an opportunity to spend a week as a Vacation Bible School teacher at a U.S. Coast Guard station chapel on Staten Island, New York City. The more I heard, the more interesting this mission trip sounded to me, and I quickly said I would go for it.
As the date of my departure grew near, I felt greater and greater trepidation about my ability to be a good missionary. I had taught Sunday School and had spent a couple of weeks as a Lutheran Bible Camp counselor, but this, I expected, would be something much bigger and more intensive.
As I boarded the plane in Minneapolis, I thought, “What am I doing? Who do I think I am? I’m not a missionary.” Yet there I was, poised to spend a week teaching Vacation Bible School to nine- and ten-year-olds in the Big Apple.
Reverend Gregory Todd, the Navy chaplain who serves the Coast Guard base at Fort Wadsworth on Staten Island, greeted me at the airport and transported me to his home. There, I met Chaplain Todd’s wife and five daughters and the other missionaries.
We short-termers came from a variety of backgrounds, but, along with the Todds, shared a common membership in the LCMS.
Betty, a 77-year-old retired court administrator and well-traveled missionary from San Diego, taught the youngest kids in our Vacation Bible School — preschool age. Betty had done many mission trips all over the world, including one a few weeks earlier, teaching Vacation Bible School in a remote Alaskan village.
Meredith, a 20-year-old from St. Louis, had the next youngest group — five- and six-year-olds. She hopes to make a career of working with youth.
Josh, a 20-year-old student from Dallas who led the seven- and eight-year-olds, had done this same mission trip two years ago. He could be seen at any point during the week giving a piggyback ride to one kid while two or more others hung on his arms. Wherever there was a collection of kids, Josh could be found in the middle.
Dennis, a telecommunications contractor from Washing-ton D.C., in his 30s like me, provided a casual young adult Bible study atmosphere for participants 11 years old and over, and his group grew from a handful to over 20.
Karen, a 40-something kin-dergarten teacher from Kansas City, moved between classes to serve as an “enforcer,” with strategies for providing disciplinary as well as instructional support.
Local residents helped by organizing crafts, games, and snacks, and Chaplain Todd’s family provided direction for music, openings, and closings.
We stayed in dormitory-style barracks and often ate in a cafeteria on the base. Our room and board was provided.
Staten Island is rather suburban — not the image of New York City that I’d envisioned — and, in fact, Fort Wadsworth, with a considerable wooded area, extends to the beach.
Our Vacation Bible School included Coast Guard, Army, and National Park Service kids (the military personnel live on the base, and the National Park Service operates the historic site portion of Fort Wadsworth and maintains property on which the base stands). In addition, some local Staten Island kids attended. The students came from a wide variety of backgrounds — racially, ethnically, and religiously — and this created interesting challenges. The children of military personnel generally had moved around a lot, with their parents being regularly reassigned to activities in different places.
We held Vacation Bible School each evening, Sunday through Thursday, for three hours, including Bible lessons, puppet shows, crafts, and games. We started with 30 students on Sunday and had a contest to see who could bring the most friends over the course of the week. By Thursday, we ended with over 90 students in attendance, and others had come and gone.
We provided some students with their first exposure to the Gos-pel. We gave them all a sense of the Lord as someone who is with them at all times and in all places; perhaps this was the most important message for the kids who had moved a lot and had few people to whom they could attach emotionally for the long-term. This might have been just the spark some of the kids needed ultimately to make the Gospel an important part of their adulthood and long-term spiritual lives.
I came to realize that missionaries are needed as much on American soil as anywhere abroad.
During our free time during the days, the Todds showed us the city — the Statue of Liberty, the Staten Island Ferry, South Beach, Ellis Island, Wall Street, Broadway, and much more. It turned out to be a great way to see New York. Considering the arduous Third World missions my friends usually undertake, where not only is the ministry difficult but so are the living conditions, I’m a little embarrassed to admit how plush a situation I had.
As I boarded the plane to return to Minnesota, I reflected on the week, chuckled at remembering my nervousness when I arrived in New York a week earlier, smiled with satisfaction over having succeeded in bringing God’s Word to my students, and remarked to myself that this had been one of the best weeks of my life.
Kaiser is communications di-rector for the Office of the Minnesota Secretary of State and is a member of Trinity Lutheran Church of Lake Johanna in Arden Hills, Minnesota.