As the demographics in north Minneapolis continue to change, three more Lutheran congregations in the neighborhood are taking final steps to end their ministries at their traditional locations. (Last year St. Mark Lutheran Church delivered its physical property to a new faith community, which became Jordan New Life, also an ELCA congregation.)
Both Immanuel Lutheran Church, 2201 Girard Ave. N., a congregation of the Lutheran Church—Missouri Synod, and Zion Lutheran Church, 2519 Lyndale Ave. N., affiliated with the Evangelical Lutheran Church in America, are selling their property to Baptist groups.
The worship center used by Morgan Avenue Lutheran, an AFLC church at Morgan and Second Ave. N., has been sold to the Pentecostal Assemblies Church of Minneapolis.
Members of Immanuel Lutheran Church (LCMS) used the month of October to remember its 111-year-long ministry. The congregation decided to make Reformation Sunday, October 28, its last as an organized congregation.
On November 1 the keys to the worship center, school and parsonage will be handed over to members of Family Baptist Church, which has purchased the property.
Immanuel’s pastor, the Rev. Gerald Arndt, told Metro Lu-theran that the congregation’s ornate eight-sided oak baptismal font has been offered to Concordia University in St. Paul, Minnesota, where it will find use in the chapel.
With over $1.5 million in funds from the sale of its property, and also from a 1993 estate gift, Immanuel is funding endowments and grants to assist several LCMS congregations in the area, Lutheran schools, and international missions. Part of the gift will become a $1 million endowment to be administered by the LCMS Minnesota South Dis-trict.
After November 1 the membership will disperse and join several sister churches of the LCMS, including Peace and Redeemer, both in Robbinsdale.
Zion’s members voted October 14 to sell their property to Salem Mis-sionary Baptist Church. Salem had until recently rented worship space from nearby Beth-lehem Lutheran (ELCA).
The next key vote for members of Zion Church will come before the end of the year. Unlike Immanuel, whose members are scattering, Zion decided to hold the remaining 300 members together and move, en masse, to another parish.
Before the end of the year they will select one of five neighboring ELCA congregations with which to consolidate. When that happens, the congregation, about half of whose members are Liberian, will take along a sizeable endowment.
Interim pastor Bruce Westphal told Metro Lutheran that Zion’s diminished membership faced a serious stewardship challenge when confronted with needed repairs, chiefly to their building’s roof, which could have run to more than $1 million. “The decision, no doubt a wise one, was to sell the building and instead affiliate with another Lutheran congregation,” Westphal said.
Zion’s consolidation with a nearby congregation may turn out to be an interim step. The remaining ELCA congregations in north Minneapolis are exploring the creation of a single parish. So far members of four, including Zion, have approved the idea. The others are Bethlehem, Jordan New Life and St. Olaf. Bethel Lutheran is still considering the idea.
Westphal said he expects Zion will hold its last service as an independent congregation around Christmastime.
Members of Morgan Avenue Lutheran, an AFLC congregation with a Finnish heritage, voted on August 5 to sell their building and facilities.
In recent years the congregation had made efforts to reach out to African Americans and Southeast Asians living in the community.
Organized in 1898, the congregation was long a member of the Suomi (Finnish) Lutheran Synod. In 1964, members voted to join the Association of Free Lutheran Congregations. The AFLC, based in Plymouth, Minnesota, is the successor body to the Lutheran Free Church.
Closing date for the active ministry and service at Morgan Church was set for Reformation Sunday, October 28.
Lutheran congregations on Minneapolis’ north side have experienced declining memberships for several decades. As the demographics of the neighborhood changed, many families reaffiliated with suburban congregations, leaving smaller and increasingly aging memberships in the urban parishes. 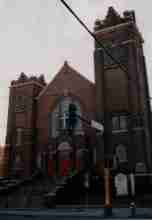