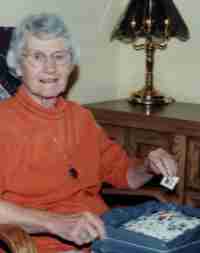 The usefulness of stamps doesn’t end when letters are delivered to the Metro Lutheran editorial office. Members of the newspaper’s staff place the emptied envelopes in a shopping bag until Claire Hesterman stops by for them.
Hesterman trims each stamp from its envelope, leaving a third-inch edge around it. Quantities of the trimmed stamps are shipped, from time to time, to a collecting agency in Washington, D.C. From there, shipments are sent to Bethel, Bielefeld, Germany.
Bethel is a world-famous community founded over 135 years ago by Lutheran Pastor Friedrich von Bodelschwing. The institution was founded to minister to the needs of people with epilepsy. Today, Bethel provides specialized care services for over 2,300 persons, including those with acute illnesses, without homes, or living with alcoholism.
Bethel’s stamp center employs over 50 handicapped people who examine cancelled stamps, thousands of which are received daily from patrons around the world. Workers remove the backing, sort the stamps, arrange them in packets, prepare catalogs and sell them to collectors around the world. Sales are an important income for Bethel.
Asked how she became interested in the Bethel stamp program, Hesterman said, “My sister and her husband visited Bethel in 1993. We at Lutheran Church of the Master began a collection program. My husband, Lowell, served as a volunteer for Global Health Ministries (GHM), which was then located in the Minnesota Church Center. He asked staff workers in the Minneapolis Area Synod Office, the Lutheran Library Association, GHM, and Metro Lutheran, all in the same building, to save stamps. It’s relaxing for me to trim them and I know they provide a meaningful source of income for Bethel.”
Has she handled any unusual envelopes? “There are many beautiful stamps from Asia and Africa.”
Claire Hesterman has now begun clipping her second-hundred-thousand set of stamps.