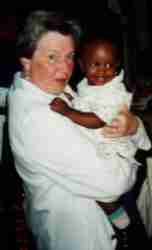 Dale and Vernita Kennen saw more than zebras in Africa

It was their first trip to Africa, but Dale and Vernita Kennen of Christ the King Lutheran Church in White Bear Lake wanted to see more than elephants and zebras.
“We wanted to learn how the people of Kenya and Tan-zania live and work together in community as well as how their faith impacts their lives,” said Vernita. “We wanted to learn how Lutheran World Relief chooses partners and projects. And we hoped to understand how our lives affect those of our brothers and sisters in East Africa.”
The itinerary
Exactly a year ago this month, the Kennens joined 21 others in a Lutheran World Relief study visit to East Africa. They traveled from big city slums to small country farms, meeting with local people who are tackling major issues like HIV/AIDS, food production, fair trade and Christian-Muslim relations.
The itinerary combined challenges with hope. On the outskirts of Nairobi, the group visited an orphanage and family center started by a Kenyan woman determined to provide a future for children who struggle to make a living scavenging valuables at a nearby sewage treatment plant. The children, many of them AIDS orphans, blessed the group with their songs and poems.
Also in the Kenyan capital, the travelers met a dynamic, self-help group formed by refugee women from neighboring Sudan. LWR assistance helps group leaders provide everything from nutrition education to preparing for eventual rebuilding of war-torn Sudan.
On the slopes of Mt. Kilimanjaro, the Kennens and their travel companions met with small farmers whose crops supply the LWR Coffee Project. Their cooperative, formed almost a century ago, sells as much coffee as they can to the fair trade market, which offers a hopeful alternative to the conventional coffee trade.
The group also visited Tanzanian Lutheran church-related projects in fish farming, bio-gas generation and water conservation. Local LWR partners include Muslims and adherents of traditional religions, as well as Christians.
The discovery
So, what did the Kennens learn? Vernita speaks for both, “We learned the way LWR works to enable and empower local folks rather than ‘tell how it should be done.’ We met the gifted, faith filled, and ecumenical LWR staff in East Africa. We saw how a seemingly small amount of funding can bring hope to many.
“Even before this trip, we nudged our parish to participate in the LWR Coffee Project. It was a real thrill to actually meet the farm families who grow the coffee and to see how their lives are improved simply by having more say in decisions about how to cultivate, harvest and sell their crop,” she said. “The farmers were delighted to hear how highly valued their crop is in another agricultural community on the other side of the world — Minnesota!
“The trip reaffirmed our faith and strengthened our commitment to supporting development work so that all of God’s children might be able to lead lives of dignity and fulfillment. I learned anew the role of smiles and touches when a common language does not exist,” she commented. “And I learned about courage, resilience, and humility.”
The hospitality
The Kennens and their travel companions were treated to an extra measure of authenticity, hospitality and security. They found themselves in the care of LWR’s Nairobi-based staff, entirely comprised of Africans who know well the partners, projects and politics of the region. Long before the Kennens arrived, the staff crafted the itinerary so that their guests would be closely linked with the heart and soul of East Africa — ordinary people in rural villages and urban slums who are quietly doing extraordinary work to improve their own communities.
“The study visits help to put a human face to relationships … they build bridges … vital in today’s polarized world,” says Dr. Asenath Omwega, LWR’s East Africa director.
Giraffes and elephants do figure into the experience, however. Each visit includes a safari — a stop that Omwega insists upon, because it is part of all that is good about the region.
The advisory
What do the Kennens say about post September 11 travel? “Go! The blessings of new friends, fresh outlooks and renewed faith far outweigh any perceived risks.”
Apparently others agree, because most would-be travelers on a study visit postponed immediately after September 11 have rolled over their registrations to another trip. LWR is sponsoring two study visits to East Africa in 2002: April 1-15 and August 1-15. For information, call 651/523-1630.