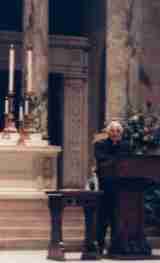 Full house at Basilica of St. Mary included many Luherans

The “Just War Theory,” officially embraced by Lutherans and Roman Catholics worldwide, came under heavy attack during a February 6 Minneapolis presentation by an outspoken Roman Catholic bishop from Detroit, Michigan.
Speaking to an overflow ecumenical audience of more than 1,300 at the Basilica of St. Mary in downtown Minneapo-lis, Bishop Thomas Gumbleton said, “There is nothing unpatriotic about questioning government policy. If we think the U.S. government is beyond conscience and accountability, we’re practicing the ‘patriotism of the ostrich.’”
The past president of Lutheran-founded “Bread for the World” and founder of the Roman Catholic “Pax Christi” (“the peace of Christ”), Gumbleton said people in less developed countries have many reasons to hate Americans. U.S. policy, he said, has consistently put America’s security ahead of justice concerns for non-Americans. “Jesus didn’t teach, ‘Blessed are the security-makers,’ but ‘Blessed are the peace-makers,’” he reminded the audience.
It was clear Gumbleton was speaking to the choir when he said, “The U.S. arms budget is an act of aggression against the poor, causing them to starve.” The remark was greeted with a tidal wave of applause.
Gumbleton admitted Christians have, since the days of St. Augustine, endorsed “Just War Theory,” which argues war is justified for Christians when certain criteria are met. But, he said, “I met many priests during the Vietnam War who persuaded me I was wrong and they were right. I decided ‘Just War’ was no longer adequate in the present situation. I began to study non-violence, and realized it was the right way.”
Gumbleton chided U.S. President George W. Bush, saying, “He says developing weapons of mass destruction is an act of terrorism, except when the United States does it.”