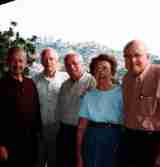 Five former Lutheran missionaries, all in their 70s and early 80s, made a trip to Madagascar October 11—November 20, 2001. All had previously lived and served there: Dr. Morris Vaagenes (10 years), Dr. Carl Vaagenes (29 years), Rev. Leonard Jacobsen (35 years), and Rev. Oliver and wife Gene Carlson (35 and 19 years respectively).
All retain their missionary fervor, most having returned to this large island off the southeast coast of Africa for speaking and teaching engagements. All currently serve in various capacities at North Heights Lutheran Church in Arden Hills/Roseville, Minnesota, with the exception of Jacobsen, who is at Como Park Lutheran.
An invitation from Madagascar provided impetus for the trip. The Malagasy National Academy was hosting a week-long celebration honoring the 133-year work of American and Norwegian Lutheran missionaries in their country.
“The five of us thought it would be great to go together,” Morris Vaagenes said. “In particular, we wanted to witness first-hand their spiritual awakening movement. They have had many revivals over the past 100 years, each building on the previous one.”
The group was also invited to the 112th anniversary celebration of Lutheran mission work in the Betioky South Synod, where the Vaagenes’ parents had served for 40 years. As part of the festivities, they were to help dedicate the new Manasoa Bible School on Nov-ember 7. North Heights Lu-theran Church had provided much of the funding for that school.
Together, the group developed an ambitious itinerary, flying into Tananarive, the Malagasy capital. Carl Vaag-enes, who hadn’t been back for 29 years, was amazed that he could speak the language fluently from the minute he stepped off the plane.
From Tananarive, group members flew to the southern region by Air Madagascar, then flew to former mission stations by Mission Aviation Fellowship (MAF). Travel by car was very difficult – the roads were nearly impassable. In the six weeks they were there, the group covered over half of the island.
Morris Vaagenes says Madagascar presents two scenarios of startling contrast. The cities have become heavily Christianized due to the work of early missionaries. Revivals are frequent and last a long time. Churches everywhere are packed and include large numbers of children and youth. And church leadership is fully indigenous. This is now a national church, no longer a foreign outreach.
“As I sat in overflowing churches,” said Vaagenes, “I often thought, ‘If former missionaries could be here to see this, wouldn’t they be thrilled?’ American churches need renewal badly. We can learn much from the fifohazana (awakening/revival/renewal) in Mada-gascar.”
The southwest coastal areas, however, are a stark contrast to life in the cities. Primitive areas are 98% illiterate, with all but 2-5% practicing animist idol worship. Tribes live in deplorable conditions and are resistant to the Gospel. Only recently has there been a new openness to Christianity, much of it due to the work of health centers and hospitals operated by the Malagasy Lutheran Health Organization.
One such effort visited by Vaagenes was the Ejeda Hospital integrated outreach program. Wells are dug using ELCA World Hunger funding in arid areas where water is scarce and/or contaminated. Four satellite health care centers have also been established and staffed with health care workers, pastors, and teachers.
“These Lutheran health team members are truly evangelists at heart,” said Vaagenes. “They are being used by the Holy Spirit in powerful ways to integrate care for the whole person.”
Vaagenes reports that as a result of this program, 50 churches and schools have been established in one small area and 1,000 converts were baptized in just one year.
Another factor in primitive Madagascar’s spiritual awakening movement has been the establishment of healing centers.
“Christians are trained and commissioned as ‘shepherds,’” said Vaagenes. “They do exorcism, prayer, laying on of hands and healing ministry with the demonized, sick, mentally ill and poor.”
Most of these shepherds work as volunteers and live in or near the villages. Several shamans have recently turned from witchcraft to Christ as a result of their influence.
“I met one village chief who was formerly a priest at the idol-worship center,” said Vaagenes. “He pleaded with us repeatedly while pointing to the large number of ill-clothed, uneducated, and diseased children around us. He said, ‘Look at these children — they have nothing. They know nothing. They have no future! They need a teacher and a school. We beg Jesus to send someone to teach them.’”
Although the Malagasy people are pleading for missionaries, workers are few. While visiting several villages, Vaagenes received requests from seven of them for schools and churches.
“This is an open door not only for education but for evangelizing,” said Vaagenes. “I return from this mission trip with new fervor for missions — for reaching the lost with the Good News of salvation in Jesus Christ.”
Morris Vaagenes can be reached at Renewal International, 2701 Rice St., Roseville, MN 55113, or e-mail him at mvaa genes@nhlc.org.
For more information on the group’s experiences, contact any one of them through North Heights Lutheran Church, 651/484-2049.