On stage or at church, she has a song for you 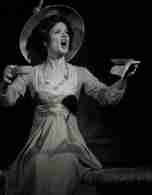 Actor is familiar presence at St. Philip the Deacon Lutheran.