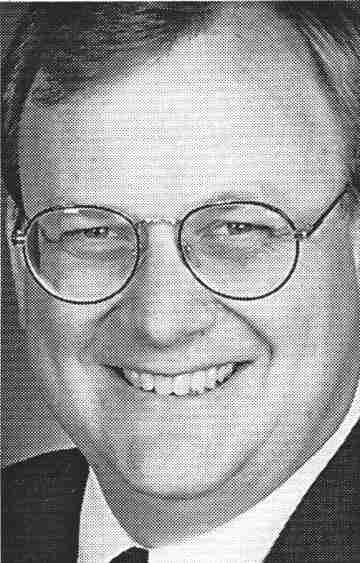 After three years under the leadership of interim directors, following the retirement of founding director Dr. Larry Fleming, the Twin Cities-based National Lutheran Choir is once again under the guidance of a permanent director. Dr. David Cherwien, cantor of Mount Olive Lutheran Church, Minneapolis, was appointed to the post this spring.
In preparation for a fall-winter-spring season of 2002-2003 concerts, Cherwien has begun to audition singers for the 60-voice ensemble and is already busy designing the next round of musical selections, along with venues for the coming set of concerts.
Cherwien clearly admires founding director Larry Flem-ing’s genius. “When he de-signed a music program, he began by asking the question, ‘Why do we need Jesus’ and then built the presentation around that. I intend to continue this pattern.”
He admitted, in an interview, that some people wondered about the choir’s survival after Fleming’s departure. “It’s a significant fact that the National Lutheran Choir is alive and well,” he says.
One of the choir’s missions, he explains, “is to keep the choral music tradition alive.”
Cherwien got involved with the choir about five years ago. “They asked me to play for the Christmas concert. I was bowled over by a number of things — their musicality, their attention to detail, and the way each section was able to express the music.”
Said Cherwien, “A lot of choirs get louder and softer as a whole choir. In the National Lutheran Choir, each section expresses its own part amazingly well. Experiencing they way they did that brought a whole new light to music which I already knew very well.”
Responding to a gentle challenge about the “presumptuous” name of the musical group (the choir is regional, not national), Cherwien admits, “It’s not really the name I would have chosen, but there’s no way anybody will be able to change it now. The name is part of the group’s identity, and it’s fairly permanently fixed.”
How will a full-time church musician, committed to an ambitious music program at Mount Olive Lutheran Church, manage the additional responsibility of directing a complex organization like the National Lutheran Choir?
“I have to be careful,” Cherwien says. “But both church and choir tasks are complementary. With the [National Lutheran] Choir having a full-time manager, this will be do-able. As director, I’ll only be expected to do a limited amount of fund-raising. Most will be done by others.”
Cherwien said the choir will rehearse at Mount Olive Church. The weekly three-hour rehearsals will run September-May. “And, I’ll do fewer hymn festivals than I’m doing now. Last year, for a while, I was doing one a week for several months.”
The new director says, “I’ve learned to juggle without cheating anybody. In a perfect world, I could do either the choir or the church position full-time.”
Cherwien grew up in Central Lutheran Church in downtown Minneapolis. While attending Augsburg College, he came under the influence of Leland Sateren, a musician who he says “influenced me significantly.”
When at Augsburg, a musician convinced him to study church music in Berlin, Ger-many. While there he met his future wife, Susan, who was studying opera.
After stints in Seattle and suburban Chicago, Cherwien returned to the Twin Cities, where he spent 10 years directing the music program at Good Shepherd Lutheran Church in southwest Minneapolis. While there he earned both a master’s and a doctorate in music from the University of Minnesota.
When cantor Mark Sedio moved from Mount Olive Church to Cherwien’s home parish, Central Lutheran, David Cherwien applied for, and secured, the position Sedio had held. “I just love it at Mount Olive,” he says of the congregation whose music director was once the legendary Paul Manz.
“This congregation is radically different in good ways. The people are deeply committed to faith and ministry, to liturgy and music. They’re also committed to the neighborhood.”
Cherwien says he feels fortunate to be cantor in a congregation where “the spirituality of the music is understood and valued. Being part of that is really fulfilling.”
As David Cherwien begins to plan for the next cycle of concerts for the National Lutheran Choir, he says, “We’ll be focusing on a ‘darkness’ theme.” And, to continue the Fleming tradition of asking, “Why do we need Jesus?”, he says, “the music we sing will deal with the fact that we need Jesus because there’s so much darkness in the world.”
The choir plans four concerts during 2002-2003.