Fifty years later, they came back

Members of the class of 1952 returned to celebrate.

Swedish Hospital graduates from 1952 returned for a 50th year reunion.

Fifty years after their graduation from Swedish Hospital School of Nursing, 41 alumni returned for a reunion at the scene of their capping ceremony.
While Swedish Hospital was not a Lutheran institution, it maintained cultural ties to Swedish heritage Augustana Lutheran Church, just up the street at 704 – 11th Ave. S., Minneapolis.
It was to Augustana Church that the members of the Class of 1952 returned on Pentecost Sunday, May 19. They were guests of honor at worship, during which they sang the class song, and also “Children of the Heavenly Father” — in both English and Swedish (see photo above).
Sylvia Hasse, a key player in getting the reunion weekend organized, told Metro Lutheran, “I can’t believe it’s really been 50 years since we graduated!” She said that, of 51 class members still living, 41 made it to the event. While a large percentage are currently in Minnesota, Hasse said “We had more out-of-staters here than Minnesotans. They came from as far away as California, Arizona, Washington State and Oregon.”
Said Hasse, “The only member of our class to earn a Ph.D., Vivian Whaley Evenson, returned from Salem, Oregon. She was presented a Distinguished Alumni Award.” Evenson is professor emeritus from Montana State College School of Nursing.
Class members met for a Friday evening dinner and told each other where they’d been, and what they’d been up to for the past 50 years. There was a Saturday evening visit to the Old Log Theatre, and then the Sunday worship service and reunion lunch afterward. At the Sunday meal around 250 alumni, from various classes, showed up.
Swedish Hospital graduated its first nursing class (three students) in 1901. The last class to graduate was in 1973, after which the nursing school closed. Hasse said hospital-sponsored programs became too expensive and credentialing requirements became a problem. As nursing candidates began to migrate instead to community colleges and state universities for their degrees, hospital-sponsored programs in the Twin Cities, and nationwide, soon disappeared.
Not long after the hospital-based nursing programs ended, private hospitals began to consolidate or close. Swedish Hospital is now part of Hennepin County Medical Center. 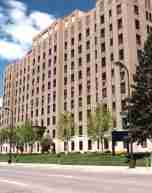