Welcome to the U.S.A., Meaza Ogbazghi! 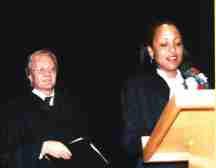 Native of Eritrea sworn in at Central Lutheran School, where she teaches.

Central Lutheran School in St. Paul, Minnesota, is known for serving a diverse community. That extends to its teaching faculty, including Eritrea native Meaza Ogbazghi.
Ogbazghi, the mother of three, all of whom are enrolled at Central School, took steps recently to become a United States citizen. The ceremony in which she would have participated was held at Bethel College, a Baptist school in suburban Arden Hills.
But Ogbazghi’s paperwork was “fouled up,” to use the words of Central’s principal, Glen A. Emery. Consequently, the school teacher wasn’t ready for the swearing in ceremony.
Emery told Metro Lutheran that, once the documentation was in order, the district court agreed it would be appropriate to conduct the ceremony at Central School. That’s what happened on October 10, with U.S. District Court Judge, the Honorable Donavan W. Frank, presiding.
It was a full auditorium of excited and admiring elementary school students, along with their teachers, who witnessed the ceremony. A reception with a flag-decorated cake capped the festivities.