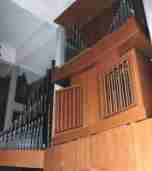 Thirty-eight-year-old instrument gets a new sound.

A renowned Lutheran organist and Yale University music professor will dedicate Westwood Lutheran Church’s rebuilt and enhanced Holtkamp/Dobson pipe organ on November 17.
Dr. Martin Jean will be at the console for the organ’s inaugural concert, a 4:00 p.m. recital which is open to the public.
The instrument will be first be played earlier in the day when Westwood’s organist in residence, Dr. Kristina Lang-lois, plays the organ at morning worship services.
Martin Jean has won a series of prestigious organ competitions, including the International Grand Prix de Chartres organ competition. Many consider the winner of the keyboard competition in the French city of Chartres to be equivalent to an athlete winning the Olympics.
Jean’s concerts have taken him across the United States, as well as to Canada, Korea and Europe. He was appointed professor at Yale’s School of Music and Institute of Sacred Music. Previously he taught music at Valparaiso University, an independent Lutheran school in Indiana.
Westwood’s Holtkamp organ was originally installed in the St. Louis Park congregation’s worship space in 1964. It was the last organ designed by Walter Holtkamp senior. The refurbishing was completed by the Dobson Pipe Organ Company of Lake City, Iowa.
The Dobson company added 11 new ranks of pipes and enhanced the instrument’s dynamic range.
The November 17 dedicatory recital begins at 4:00 p.m. Westwood Church is located at 9001 Cedar Lake Road (just east of US 169) in St. Louis Park. A free-will offering will be received.
For more information, call 952/545-5623.