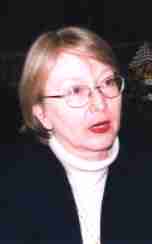 The newly-elected CEO of Augsburg Fortress, the publishing ministry of the Evangelical Lutheran Church in America (ELCA), took her time getting to Minneapolis.
It wasn’t a lack of enthusiasm for the task at hand that slowed her down. Beth Lewis wanted to find out what members of the ELCA were thinking — and saying — about their publishing house.
She got an earful.
At Lutheran listening posts on her way from Boca Raton, Florida, to the Twin Cities, she asked Augsburg Fortress customers what was good — and not so good — about their church publishing house.
“I learned some of our customers are exasperated with how they feel they’ve been treated. But nobody I spoke to wanted to write off the publishing house.”
What was troubling the clientele? “A lot of Sunday school teachers want our curriculum to improve. Many felt we were not in touch with what’s going on now. They want it to remain solidly Lutheran, but say it’s not been especially accessible to volunteer teachers.”
Curriculum sales have historically been the largest segment of Augsburg Fortress’ cash flow. In recent years those sales have been slipping.
A life-long member of the ELCA and its predecessor bodies, Lewis grew up using the denomination’s Sunday school materials. On her trip north, one person she met gave her a photograph of an ELCA mom who was prepping for her Sunday class while her spouse drove her and the kids to church. “That’s the kind of teacher we have to publish for,” Lewis said.
Since her arrival in Minneapolis at the end of September, she has set as one of her first priorities to meet and converse with every employee in the firm — either one-on-one or in small groups. “We have 277 employees,” she said. “These are our front-line troops. They know how this place works, and they know how to fix things.”
When the ELCA Board of Publication went looking for a replacement for the retiring CEO, the Rev. Marvin Roloff, they advertised for an individual who could identify weaknesses in a large, struggling operation and engineer a healthy turnaround.
With millions of dollars of deficits in recent years, Augs-burg Fortress is cash strapped and sales poor. Lewis may be precisely what the ailing firm needs right now.
A 22-year veteran in the field of commercial publishing, the new CEO has a history of helping turn around floundering companies. She said it’s already clear to her that three things need to happen at Augsburg Fortress:
* Communication skills, both internal and external, need to be improved. Lewis said the firm’s employees at its several sites outside Minn-esota often feel disconnected from, and even ignored by, the Minneapolis office.
“That’s an internal problem we can fix,” she said. “And then there’s the external challenge: we need to communicate better with our customers. We need to do a better job telling them what we have and what we do. We actually have seven different businesses here, and we need to tell people about all of them.”
* The level of accountability needs to improve. That includes meeting publishing deadlines when promised. “This has sometimes been a problem,” she confessed. “We want the staff to take individual ownership and pride of craftsmanship.”
Lewis admitted that recent layoffs and reorganizations have caused a lack of continuity. “A recovery period is needed. We have employees who feel injured, even though they still have a job.”
* The publishing house “needs some grace.” Lewis says it’s clear that some mistakes have been made, but “we’re asking customers to give the new administration a chance to do better. And, it would help us if our clients wouldn’t ask us to try to fix things too far in our past. We need people to forgive us — and to recognize we’ve actually fixed some of the problems they remember us having.”
She said, “Some things will take a while to remedy, while others can be fixed quickly. An example of a possible quick fix is the way we do invoices. It confuses people to get multiple bills mailed to them, when we might be able to consolidate those into one mailing per month.”
The main thing, she said, is that “we want people to know we’re listening.”
In the short term, Lewis says, “Augsburg Fortress may have to get a little smaller. But in the long term, I see stability and growth.”
The new CEO said the publishing house’s greatest strength is the talent pool represented by its present em-ployees. “When I first studied the balance sheet, I thought, ‘Oh, my, we’re going to have to clean house!’ But then I met the staff. Was I ever im-pressed! I quickly became convinced that there’s no reason these employees can’t turn this enterprise around.”