A visit to the land of fire and ice 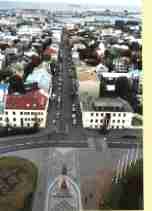 Reykjavik, Iceland's capital city, from the top of Hallgrimskirkja.

Many travelers are unaware of Iceland’s stark beauty.

Originally my wife, Kathe, and I planned to spend a week in Ireland. But the Twin Cities tour company offering the package suddenly went out of business.
As we grieved the loss of our non-refundable deposit, Kathe suggested, “Why don’t we go to Iceland.” Truthfully, I’d never seriously considered it. But we’d flown Icelandair to Europe in the past, so we decided to try an Icelandair package tour of this remote Lutheran island nation.
The only disappointment we experienced was the confusion at Keflavik Airport, due to inadequate instructions from the airline about where to meet a pre-paid shuttle into Reykjavik. (We ended up paying for a bus ride that should have been free.)
Icelandair owns a network of tourist hotels in Iceland. During our week on the island, we stayed in three of them. Each was clean, comfortable and modestly ap-pointed. (In one of them our group of 35 had the place to ourselves.)
The tour lived up to its promise — that we’d see “glaciers, geysers and waterfalls.” The glaciers, including one that’s the largest in all of Europe, cover large sections of the island’s high interior. As they slowly melt, they create the many waterfalls that cascade down to the sea.
Two techtonic plates collide beneath Iceland, giving rise to volcanos and geysirs. The rift is clearly visible where it slices the island from southwest to northeast.
There is one ring highway that circles the land. When, on rare occasions, volcanic eruptions in the interior send melted glacial torrents to the shore, both pavement and bridges give way. Icelanders live in a constant state of wariness, awaiting the next explosion.
Like other Scandinavian nations, Iceland is officially Lutheran. While 95% of the population claims membership in the state church, only about 5% show up at worship on any given Sunday.
Our impressions of the nation included these:
* The land is underpopulated (280,000 people altogether, half of whom live in the capital city and its suburbs).
* There is little pollution. Adjectives that come to mind are “sensible” and “clean.”
* There is very little in- or out-migration. Everyone is probably related to everyone else, one way or another.
* Visitors are welcome. English is used everywhere.