How a Lutheran pastor got Martin Luther King to Miami Beach 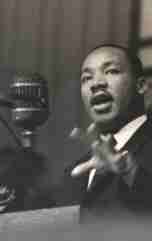 The Baptist civil rights activist caused controversy when some tried to get his speech cancelled.

For many of the 20,000 young Lutherans who attended the 1961 Luther League convention in Miami Beach, Florida, that event was the beginning of a journey in awareness of civil rights issues. They can thank the Rev. Dr. L. David Brown of Edina, who at the time was the Executive Director of the Board of Youth Activities of the former ALC. It was Brown who arranged for the Rev. Dr. Martin Luther King, Jr., to be a convention speaker.
For many of those Lutheran youths in attendance it was the first time to hear a black American preach. And, Brown says many acquainted with Dr. King said it was one of his best speeches.
For David Brown, whose father was once president of Concordia College in Moorhead, Minn., it had been a journey, too. Brown recalls how in the 1930s he often traveled with his father through North Dakota and Montana, recruiting students for Concordia. They generally stayed in the homes of hospitable Lutherans along their trek, but occasionally slept in hay mows when no one had an extra bed available.
Brown, who held the ALC youth director position from 1959 to 1969, had been invited to a 1960 White House conference on youth. There, during afternoon break-out sessions of five persons each, he had worked with Coretta King, wife of the Rev. Dr. Martin Lutheran King, Jr. Brown was impressed with Mrs. King and invited her husband to speak at the 1961 national ALC youth convention.
At the time, the conservative John Birch Society was quite active and “made it a mission to discredit King,” Brown said. He received over 600 letters asking him to “dis-invite” King as a convention speaker. Brown talked to then ALC President Dr. Fredrik Schiotz about the issue. The John Birch Society had claimed King had attended a communist conference. It turned out it was a more benign socialist event. Schoitz suggested that Brown talk to Norman Thomas, the noted socialist leader. Brown recalls a 2-1/2 hour visit with Thomas in his office furnished with “rickety office furniture.” Brown followed up by talking with the Anti-Defamation League and then put together a response.
Then, without further explanation, Dr. King called Brown’s office and said he couldn’t make the convention speaking engagement due to another meeting. Brown quickly went to Atlanta. There he asked three cab drivers to take him to Dr. King’s church; none of the three claimed to know of Dr. King. So, Brown took off by foot, walking to the church on a steamy-hot day. There he met Dr. King’s father and brother, who did not encourage Brown in his quest to reinstate his convention speaker. Brown credits a call to Coretta King with turning the tide.
Martin Luther King, Jr., did appear before the youthful Lutherans and “gave a whale of a talk,” Brown recalls. When he took King to the airport after his speech, he and King had a good conversation. That included King’s saying that rather than other curricula he might have chosen at Boston University, he studied dogmatics. Brown observed that King might not have gone as far as he did without that dogmatics background.
Brown, who was active in a number of civil rights marches, etc., said Dr. King always recognized him when their paths crossed.
Reflecting on his years at ALC, Brown says that there were letters of disapproval on some youth convention programming but that finally in 1968 there was a letter of commendation. In 1965 there was even a heresy trial. Through it all Dr. Schoitz and later Dr. David Preus, ALC presidents, were supportive. Brown says the “firestorm of protest made me even more committed.”
Brown recalls with pride the Youth Activities staff he assembled at ALC. Of a staff of 13, two were black Americans. One was the Rev. Dr. Nelson Trout, who had earlier served a southern parish where Rosa Parks was a member. That ALC staff was characterized by creative people who had the commitment to getting things done, Brown said. And, it was the largest youth staff of any U.S. Protestant denomination at that time.
To his surprise, considering some of the controversy of the 1960s, Brown later served as Iowa Bishop from 1979 to 1992. One of Brown’s aims in an active retirement is to write about his experiences to pass along to his children who were young at the time of civil rights unrest.