Need a job? Come to church! 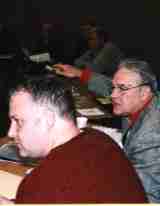 The Rev. Rod Anderson, right, chairs a session for unemployed men, while a job seeker ponders his options.