When this college prof reads the Bible, it comes out rhyming

You can’t get into Dr. Jeffrey Burkart’s office, on the campus of Con-cordia University in St. Paul, Minnesota, without walking past a piano. You can’t see the books on his shelves without looking past the puppets and stuffed animals. You can’t talk to the good professor for more than five minutes before he breaks into song — voicing lyrics he wrote himself, for dramas he’s had a whale of a good time putting together.
Burkart, whose job de-scription takes three lines of fine print on his business card, loves the Bible. He also loves the Lutheran Church. And he’s crazy about music.
Combine those ingredients, and stir in a generous dose of Jeff Burkart’s creative genius and infectious enthusiasm, and you’ve got the recipe for “Gospel Time in Gospel Rhyme.” The series of musical stage plays began by accident, and has developed into what is fast becoming a cherished annual tradition at Concordia University.
It all started with a profound sense of dissatisfaction. One day in 1993, the Professor of Drama Ministry at Concordia, St. Paul was not pleased with his devotional life. He wanted to enrich it, but wasn’t sure how to do it.
“I decided to start getting up an hour earlier than usual. I surrounded myself with all my Bible study resources. And then I did something really odd. I closed my eyes, opened my Bible, riffled through the pages — a lot of pages, because I wasn’t in the mood right then to end up in the Old Testament — and found myself pointing to the story of the Wise Men, in the Gospel of Matthew.”
That was where Burkart began his “new and improved devotional time”: reading the story of the Wise Men. He was busy asking himself the Lutheran question, “What does this mean?” when his mind kicked into overdrive and he found himself interpreting the text in rhyme:
It so happened, late one night,
A star appeared and at its sight
Some magi (professors from somewhere in Persia)
Looked, and overcame inertia.
Before he knew it, Burkart had a full-blown poem, interpreting the story.
The next day he repeated the process. This time he rhymed the story of Jesus healing a blind man. Once he overcame his temporary aversion to the Old Testament, he rhymed the entire Book of Jonah. “My version actually used more words than the Bible story does,” Burkhart says. It wasn’t long before he was setting the texts to music.
During the fall of 1994, Concordia dedicated E.M. Pearson Theatre. Burkart proposed staging his Bible dramas there. The theatre budget was already used up on a Broadway musical, but that didn’t stop him. He cannibalized the sets from “Guys and Dolls” after the last performance, pulled together a student cast, and put on “Gospel Time in Gospel Rhyme.” There were seven performances, most of them sold out. Each of the 1,900 who showed up paid $2 to get in. (This year they’ll pay $8.)
“We had $1,000 left over. I offered to give it to the Theatre Department. They said I should keep it and do another production the following year.”
He’s been doing them, annually, ever since. The first year, the music was done on a handful of instruments. This year the sound track was created in a professional studio and includes lush orchestration. Says Burkart, “People love the productions, but they’re not merely entertainment. We always make a Gospel point at the end of the story. It’s all about Jesus.”
GTIGR performances have been published as storybooks. They’ve been broadcast on Lutheran Satellite Television. And next year they’ll go on tour in several states.
Jeff Burkart is full speed ahead. He says, “If fun was gold, I’d be a millionaire.” 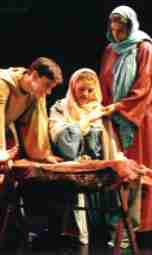