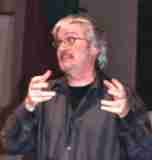 When Leonard Sweet, an ordained Methodist pastor, steps into the pulpit, he insists on taking two “books” with him — the Bible and a laptop computer.
That’s what the Word Alone Network Conven-tion’s keynote speaker told delegates at sessions held April 25-26 at Roseville Lutheran Church, Roseville, Minnesota.
Sweet, a Seattle churchman, told an audience of 300 that media always defines the age. He argued there have been three media inventions, all of which profoundly shaped Christianity.
“The first was the Greek alphabet, the basis of the language in which the New Testament is written. The second was Gutenberg’s movable type printing system, which allowed Luther’s translation of the Bible to be distributed everywhere.”
The third “media wave,” Sweet said, is the Internet, an invention nobody dare ignore, least of all church people.
Sweet claimed Lutherans, who presided at the birth of the printing press, may have a hard time adapting to what replaces it. He challenged Lutherans to take full advantage of appropriate new technologies for doing mission.
“Our kids are not bookworms,” he explained. “They’re ‘videots.’” But he cautioned the church not to write off print media. “The number one site on the Internet is a bookseller.”
Moving comfortably into Lutheran categories, Sweet said, “The essence of biblical orthodoxy is paradoxy, an idea the modern world has trouble with.” A paradox is a statement that affirms seemingly contradictory truths simultaneously.
Quoting classical Lu-theran theologians, Sweet reminded his audience, “We are both saints and sinners.” He urged his listeners, “Don’t compromise the opposites: reach to both extremes and hold both simultaneously.” He quoted Ecclesiastes 7:18, which says “Find a middle course,” but whose footnote (what Sweet called “the minority report”) says, “follow both courses at once.”
Reflecting on current advertising in the media, he lamented, “Every commercial is telling you the Gospel is wrong, that the most powerful forces are physical, not spiritual.” He called his listeners to “be pneumanauts — sailors of the Spirit.” Building on that challenge, he said churches should forget about being “seeker-driven” and focus on being “Spirit-driven.”
Building on the convention theme, “With the Flow or Against the Current?”, Sweet said the first Chris-tians fought the current, adding, “Martin Luther’s 95 theses were also counter-current.”
He said, “The waters out there [in secular culture] are getting increasingly hostile to Christianity. The home-court advantage is gone. In some parts of the U.S., people are openly hostile to Christianity. Some opponents say, ‘You [Christians] had 200 years. Now give us our turn [to dominate].’”
Said Sweet, “It’s an increasingly anti-Christian culture, but that might be good for Christianity.”
Attendance at this year’s national convention was down from previous gatherings, according to a registration staff person.