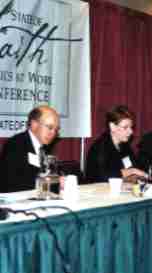 Two members of a panel of business leaders shared their thoughts with conference attendees.

Over 200 Twin Cities business leaders and church
leaders gathered in downtown Minnea-polis October 16
to talk about ethics in the workplace. What they had to
say suggested Minnesota’s captains of industry think a
lot about the topic, and are intentional about putting
their values into practice.
The day-long seminar began with a prayer service at
Central Lutheran Church, where ELCA Minneapolis
Area Synod Bishop Craig Johnson preached. He said,
“My grandfather was a banker. He gained a reputation
for honesty and integrity in business.” Johnson said
that, according to family lore, his grandfather eventually
paid back everyone who lost money during the
De-pression because of his bank’s closing.
“God calls us to act for the other,” Johnson said.
Most of the day’s sessions were held across the street,
at the Minneapolis Convention Center. Both clergy and
business leaders participated in a pair of roundtable
discussions, where current issues confronting the
business community were laid on the table.
* Ron Lund, an attorney for Briggs & Morgan, told the
group about a European vendor who asked the CEO of
Medtronic, “Do you want us to sell pacemakers or to be
ethical?” Said Lund, the reply he got was, “Yes.”
* Jon Eisele, head of the firm Deloitte & Touche, said,
“The people at Enron didn’t wake up one morning and
say, ‘Let’s do something wrong.’ It was a lot more
subtle than that.” He said that, in the midst of the
subtleties, “the church can help decision-makers
choose the right thing.”
* The Rev. John Hogenson, executive pastor at St.
Philip the Deacon Lutheran Church, Plymouth,
Minnesota, lauded a policy followed at Multifoods
Corporation. The CEO, Gary Costley, also a member of
St. Philip the Deacon, arranged to have the lowest paid
employees pay the least for health coverage, while the
highest paid were asked to pay the most.
* Dr. Frances Hesselbein, noted author and consultant,
said, “In our day cheating is more widespread, partly
due to the decline in the function of shame, and partly
because religious values now appear to have less
impact than before.”
* Ted Piper, Chairman, Piper Jaffray, talked about a
downturn in his company’s fortunes and his decision to
draw on his faith in a crisis. He said, “In the midst of
incredible business turmoil, I decided, finally, to turn my
problems over to God.” But, he admitted, he still could
not find a way to “go public” with his faith.
* Multifoods’ Costley followed up on Piper’s comments,
saying, “If you haven’t had an opportunity to speak
publicly about your faith, I encourage you to do it. It will
change your life.” He said his ELCA congregation gave
him the opportunity to do that, through a group in which
he participates.
Later in the day, Costley said, “The leaders at Enron
were actually living out their values. The problem was,
they were the values of a bunch of crooks.”
* Jeanine Rivet, Exec-utive Vice President for
UnitedHealth Group, de-scribed a time when her
organization had to lay off 2,500 employees. “It was
difficult. We asked the question, ‘If it were us being let
go, how would we want it to be done?’ That shaped our
process. We actually got thank-you letters from some
who lost their jobs, because of the way we handled it.”
* John March, Vice President of Cargill Corp-oration,
told the group, “Profits are important, but these are not
eternal values. Quoting Scripture, he said, ‘If you have a
servant heart, maybe you should park farthest from the
door sometimes.”