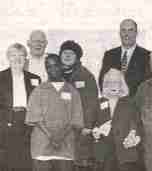 Seven residentsw of Elliot Park neighborhood talked about their recollections and their faith.

An air of excitement mingled with the enticing aroma of freshly-popped popcorn at the recent premiere showing of a new video.
The video is titled “Life STORIES” and chronicles the lives of seven older residents of the Elliot Park neighborhood near Augustana Lu-theran Church (ELCA) and Augustana Health Care Center, both on the southern edge of downtown Minneapolis. The scene of the premiere was the auditorium of the Augustana Health Care Center. As part of the premiere there were introductions of the producers, directors, production crew and “stars” of the new 45 minute video.
Motivation for the video project was an interest in preserving the life stories of older residents and the impact those stories could have on young people. Of the seven lives chronicled, three are those of members of Augustana Church and the other four are neighborhood residents.
Those active in planning and guiding the project included Diane Johnson, Director of Lifelong Ministry at Augustana Lutheran Church; Karen Coons, Director of Volunteer Services at Augustana Health Care Center, and Sheila Lynch, former Neighborhood Ac-tion Coordinator for Elliot Park Neighborhood, Inc.
Diane Johnson said of the project, “It was reaffirming for older people to record their life recollections and to see that God was present in their lives.” The project seemed a natural for Augustana Church, which has been providing for the health care and housing needs of seniors for over a century. (Augustana Health Care Center currently has a patient population of 303, and there are 382 units in the adjacent Augustana Apart-ments.)
Involving youth was an-other dimension of the project. Initially about a dozen youth were active in interviewing and videotaping the seniors’ life stories. As the project moved along, some of the youth dropped out but two were “super interested,” in the words of Johnson. They are Deonta Cunning-ham and Danielle Carson, black youths from Messiah Lutheran Church (ELCA) in south Minneapolis. A benefit to the involved young people was learning skills valuable in the job market.
The story of the video project started over a year ago when Augustana Vol-unteer Services received a grant from Thrivent Finan-cial for Lutherans and Calvary Lutheran Church. That grant was intended for recruiting youth volunteers for leadership in their church and community.
The ideal means of achieving the intended goal seemed to be a project that would interest youth, make use of their knowledge of technology, and allow them to develop relationships with the residents of Augustana Health Care Center, Augustana Apartments and the Elliot Park neighborhood.
At the same time, a senior resource center was being developed at Augustana Church. Johnson said, “One of the aspects was to record the life stories of seniors. Also, Elliot Park Neighbor-hood was looking for new programs for youth for the summer. It was soon realized that if we combined our resources we could develop a project to fulfill the objectives of the youth grant.”
Augustana Church used grant money to purchase a video camera. Members then connected with the Inde-pendent Feature Project organization which had expertise and provided video editing equipment necessary for producing the finished 45-minute video.
Johnson hopes that the video project is just the beginning of recording life experiences of older members of her congregation and residents of the neighborhood which is seeing development of major new housing facilities. She noted that some of the seniors can contribute stories on the changes they’ve seen in their neighborhood over the years. Also, some older members have contributed ideas for interviewing — topics that will bring memories into focus and resonate with folks who see the finished videos.
Anyone interested in knowing more about how the project worked, or who would like to view the “Life STORIES” video may contact Diane Johnson. She can be reached at 612/332-8595 ext. 104. Or, call Karen Coons at 612-333-1551.