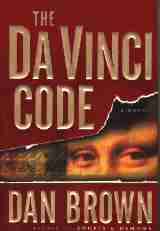 When Luther Seminary New Testament professor Matthew Skinner agreed to make three presentations during January at Edina Community Lutheran Church, neither he nor the pastors expected more than 50 people to show up.
More than 300 came!
The fact that the discussion topic was “The Da Vinci Code and the Bible: Sorting out Faith and Fiction” had a lot to do with that. Skinner told Metro Lutheran, “I knew things would be different when I saw people showing up with [Dan Brown’s best-selling novel], but nobody was carrying a Bible.
Skinner talked about the Bible anyway, addressing issues raised by assertions Brown makes in his fast-paced thriller, a story based on theories surrounding the centuries-long search for the “Holy Grail.”
Following up on Brown’s fictional plot line, which argues that Leonardo Da Vinci’s famous painting of the Last Supper shows Mary Magdalene seated next to Jesus (because she was, supposedly, his wife), Skinner led listeners at a January 20 session through a complex web of traditions that have grown up concerning her.
He said that the “mysterious person” seated at Jesus’ right hand could have been John “the beloved disciple” after all, since tradition often showed him to be young and even effeminate-appearing.
Dismissing the idea that Mary was a prostitute, he also disagreed with the idea that an organized plot was at work, keeping women out of church life in the first centuries. But, he admitted, the Apostle Paul does not provide a consistent picture. “He salutes women in leadership roles in the church, yet elsewhere puts restrictions on their behavior or authority.”
In a conversation with Metro Lutheran’s editor, Skinner said, “Something happened in the church that made it become impossible for women to hold leadership roles. Yet, even the first congregations were not egalitarian, as we understand the term.” He said, “Keep in mind, the New Testament texts were written in a patriarchal context.”
He challenged Brown’s contention that the books of the Bible were decided by Emperor Constantine. He admitted the Roman emperor had a role in the church’s development (after AD 330), but said, “As early as AD 150, leaders of the church are already discussing ‘which texts we find useful.’” That, he explained, implies the canon (approved list) of Scripture books was being determined gradually.
“Many discarded texts (not included in the Bible) are really at odds with orthodox Christianity,” he said, arguing that’s most likely why they were not accepted.
Skinner suggested The Da Vinci Code was having at least one salutary effect: “Biblical study has become an academic speciality,” he said. “That has its benefits, but it tends to take the Bible out of people’s hands. This novel has people talking about [the Holy Scriptures]. That has to be good.”