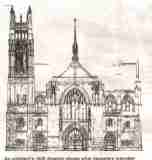 The congregation first envisioned the structure 86 years ago.

When Central Lu-theran Church in downtown Minneapolis constructed its landmark worship center at Third Avenue and Twelfth Street, the 1920s were still roaring. But a 139-foot-high bell tower, intended to stand at the northeast corner of the building, was never constructed. The Great Depression made money scarce, and the tower was put on “indefinite hold.”
Make that 86 years of indefinite hold.
There are several thousand fewer members at Central these days than there were in the 1950s, when the congregation’s membership was cresting. That means there are fewer dollars available for projects like bell towers.
Enter an anonymous donor. Someone who thinks Central should make its mark against the downtown urban skyline came forward in February, 2003, agreeing to pay for the construction of the tower, nighttime illumination, and 23 bells with a maintenance contract.
There were two conditions. The gift is to remain anonymous and must be used only for the tower project. And, names of Central Lutheran’s original twelve founding families are to be carved into the stone at the tower’s base.
Members of Central voted to accept the gift at a congregational meeting on March 28. The final cost of the project could reach $3.6 million. Construction is projected for completion by Christmas 2005.