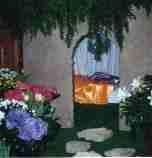 Congregation features an empty tomb in its chancel.

The stark reality of the resurrection is illustrated (left) with a re-creation of the final resting place of Jesus each Eastertime, at Elim Lutheran Church, 3978 West Broadway, Robbinsdale, Minnesota.
Members of the congregation’s Altar Guild make it their annual task to arrange around 200 plants in the chancel of the congregation’s worship space. The display includes mums, azaleas, tulips, hydrangea and lilies, and takes up to six hours to complete.
According to Shirley Nygaard, a staff member at Elim, the custom began in 1957. The tomb was added in 1959. Members of the congregation donate money for the flowers in honor, or in memory, of family or friends.
The display is open to the public on Easter Sunday afternoon. The following day, the flowers are distributed to members of the congregation and friends living in area nursing homes, or those who are homebound.