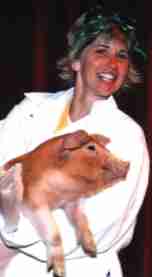 The students filled jars with cash, “voting” with their donations for their favorite teachers.

Mayer Lutheran High School teacher Joelle Grimsley won the dubious honor of kissing a live pig at an assembly May 3. The students at the LCMS school in Mayer, Minnesota, raised funds for a Lutheran High School in Nagercoil, India, by putting money in jars with teachers’ names on them. The teacher whose jar had the most money had to kiss the pig.
The jar marked for Grimsley, a physical education teacher and coach at the school, collected over $600. The jar for the next closest teacher fell short by only $35. The fund-raiser brought in a total of over $1,400.
“I thought I would be okay,” Grimsley said, “but the closer I got to the pig, the more it looked like it was staring at me!” She put on “protective gear” before kissing the snout of the pig. The animal was brought in by a student.
The money raised will support the students’ Mayer Lutheran India project. The students are sponsoring an LCMS boarding school in southern India through Lutheran Partners in Global Ministry. The school teaches the love of Christ to students who are “outcasts” and have no hope or future. The school also provides food, clothing, and shelter for the students.
Metro Lutheran readers interested in donating to the Lutheran school in India may contact Johnny Goetz at Mayer Lutheran High School, 952/657-2251, ext. 305, or goetzwho@aol.com.