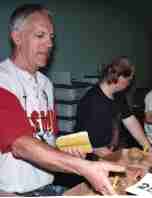 Says John Bohnsack, “As a child, the story of the Good Samaritan and the question, ‘Who is my neighbor?’ made a great impression on me.”
Pastor Bohnsack is executive director of Community Emergency Service (CES) in South Minneapolis. “CES is a means, in 2004, by which people can express the kind of care and concern Jesus narrates in his parable,” he explains.
CES is a non-profit crisis relief and empowerment ministry obedient to the directives Jesus gave his followers, and extending his love to low-income, inner city residents. Affiliated with Augustana Lutheran Church (ELCA) and assisted by other Twin Cities congregations, it serves 17,000 people annually. Those assisted include single parent families, the elderly, recent immigrants and persons who are physically, mentally or emotionally challenged.
Bohnsack recalls individual stories. “A woman from Duluth fled an abusive husband who had knocked out several of her teeth. She wanted to stay in Minne-apolis and came to us for help. We gave her a start by assisting with housing.
“A brittle diabetic, 32 years old, was losing his eyesight and needed a pancreas transplant. When a pancreas became available, he had to leave his job and his medical benefit lapsed. We paid his insurance premium for two months, bridging the gap until COBRA (a medical plan) could take over coverage of $30,000 in accumulated bills.”
Feeding the hungry through its Foodshelf, Meals on Wheels and weekly “Second Harvest,” is a major outreach of CES. “As we share a bag of groceries, we ask if the recipient has a prayer request,” Bohnsack says. “If so, we invite them to pray with us at that time. We use the moment to learn the situation that underlies their need and also as an opportunity to share the story of our motivation.”
That story begins in 1971. Russell Lund, founder of the Lund grocery chain, came to Augustana’s then-senior pastor, William Berg, saying, “I would like to give money to help families and individuals in crisis in the inner city.” He was offering $5,000 in seed money. Bohnsack, a member of the Augustana staff at the time, helped initiate the ministry that would grow into CES. “Russ Lund believed that if this was a vision born of the Lord, God’s people would carry it forward long after he was gone.” Lund eventually contributed a half million dollars to CES.
Bohnsack says, “Russ Lund’s vision was fulfilled and exceeded. Each year $1,000,000 in cash resources and gifts-in-kind passes through these doors. We are in partnership with 75-100 churches, half of them Lutheran. According to our auditor’s latest report, 84.5% of our budget goes to program and service.”
Since 1978, CES has been located at 1900 11th Ave. South, in a former Methodist church building. From its beginning until now, CES has shared 2.75 million meals. It has assisted nearly half a million inner city residents in need.
A combination of government cutbacks and the weakened economy in recent years has put stress on the CES budget. “The recession is winding down, but the inner city is always the last to recover,” Bohnsack says. “A few years ago we had resources to assist people with housing payments through the 25th of the month. That amounted to $90-95,000 yearly. Now, $130,000 gets us only to the second or third day of the month. Early in the month, we receive over 80 calls per day requesting housing as-sistance.”
A high priority at CES, Bohnsack says, is “our passion for facilitating the way back from crisis to self-sustenance for the folks who come to us for help.” This could call for something as simple as shoes or tools, or as major as a car, items needed for successful employment. So far, CES has facilitated the donation of more than 350 cars.
CES has the equivalent of nine full-time employees, making individual and congregation volunteers essential. The Rev. Don Rudrud is coordinator for congregational relations. “My role is to invite pastors and staff here for tours. I host projects and train volunteer counselors who will, in many cases, match people with neighborhood churches [to nurture them spiritually].”
Work with Dignity is a CES program that Rudrud would particularly like churches to know about. “We need job referrals. People tell us they are trying to live on $500 per month in assistance. They would prefer to work for a living wage. We need to partner with Lutherans and others acting out of Christian concern, who can tell us about full-time employment opportunities for our clients.” Rudrud offers to preach this message in metro area congregations.
* * *
Contributions to Commun-ity Emergency Service are always welcome, especially now. During August 2004, ac-cumulated gifts up to $40,000 are eligible for matching funds. To contribute, to volunteer, or for information on other CES programs, phone 612/870-1125 or visit the Website: www. sf.org/c/ces.