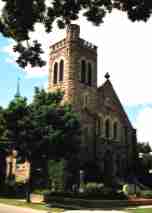 The century-old parish has been served by three pastors who became bishops.