It is Sunday morning in Minneapolis ... Forget about Lake Wobegon. Lutherans in the Twin Cities have their own music and comedy radio program. And this one has actual Lutherans in it.
Members and friends of Diamond Lake Lutheran Church (ELCA) in south Minneapolis have been enjoying regular doses of the “New Frontier Lutheran Radio Hour” once a month for the past three years. The hour-long variety show, created in a broadcast format, can be heard by showing up in the fellowship room during the adult forum hour (9:30 a.m.) once a month on a Sunday morning.
What will you hear when you get there? If you’d been on hand on November 24, you would have been treated to:

* a humorous sketch about a church member who went to Saskatchewan and apparently returned without his wife;
* a debate about the approaching Christmas smorgasbord, and whether it is acceptable to offer a vegan meatball option;
* a sketch describing a group visit by members of the congregation to an exhibit of the Dead Sea Scrolls;
* music by the New Frontier Lutheran Singers;
* an update on current giving trends, and a suggestion that hitting it big at a Las Vegas roulette table might help to shore up parish finances; and
* an interview with a theologian from Luther Seminary (the serious part of the show).

According to Diamond Lake Lutheran’s pastor, the Rev. Mark Orvick, the idea for the monthly radio show morphed out of a search for an alternative worship service for the congregation. A conversation with long-time church member Graydon Royce, a writing professional who works for Minneapolis’ Star Tribune newspaper, led to the Sunday morning variety program format. 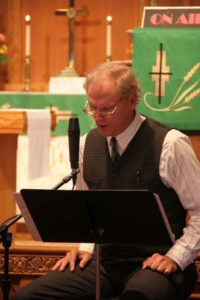 The idea for the monthly radio show morphed out of a search for an alternative worship service for Diamond Lake Lutheran Church.

Royce once wrote a column for the Lutheran Brotherhood (LB) Bond magazine titled “One Pew Over.” It featured members of fictional New Pioneer Lutheran Church. When LB merged with Aid Association for Lutherans and became Thrivent Financial, a new magazine emerged, but the column was not continued. When Orvick prodded Royce to create something for the congregation, New Frontier Lutheran was resurrected, this time as a Sunday morning radio program.
Orvick, who has served Diamond Lake Lutheran for 11 years, says the thousand-member congregation is growing, but was not doing a good job of reaching the unchurched. “The mock radio program appeals to people who probably wouldn’t come to a regular worship service,” he says.
Royce sees an additional purpose in the monthly productions. “The idea was to allow us to look at ourselves and our customs, and be able to have a laugh at them. And, it helps people to think about what it means to belong to a church unit — and to get a better understanding of what it means for us to belong to one another.”

The ideas for program segments, Royce says, come from daily life, suggestions from members and outsiders, and current events. “We have a group of four or five people who meet and kick around ideas,” he says. “In January we’ll have a skit about how singers are getting locked out of the choir loft by members of the worship committee.” Anybody who’s been paying attention to the travails of the Minnesota Orchestra over the past year will know where that idea came from.
What Lutherans jokingly call “the third sacrament,” coffee in the fellowship hall, got some special attention in an unexpected way. Royce stays in touch with former colleagues, journalists who used to work with him at the Star Tribune. One such friend is Steve Berg, a member of Mount Olive Lutheran Church in south Minneapolis.”
“Steve and I were talking,” says Royce, “and he mentioned to me that someone at his congregation had submitted a card with a suggestion that said, ‘Have you ever considered upgrading your coffee?’ That led to a skit we developed, about how we need to improve the quality of our coffee in order to compete successfully with Starbucks or Caribou.”
Sometimes program elements are drawn from actual incidents. “We became aware of a woman who was planning a flight on a commercial airliner. She knew they were going to require photo identification, but she wasn’t happy with the photo on her driver’s license. She decided to take a copy of the church photo directory with her, because she liked that picture better. Of course, the folks at airport security didn’t let her use the directory instead of her license, but it was a charming vignette.”

A place where everyone knows God’s name 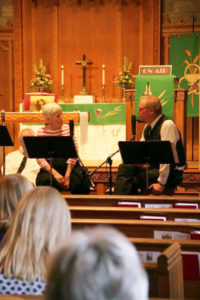 Speaking of A Prairie Home Companion, with its fictional “Lake Wobegon Lutheran Church,” Royce admits there are some similarities. “That series is the gold standard, of course, but Keillor didn’t invent the form. And our version, crafted for Sunday morning, feels just right for our audience.”

Royce has written a half-dozen musicals that the youth of Diamond Lake Lutheran have staged each spring.

Royce was raised Lutheran in a congregation near Mound, Minnesota. Growing up, he remembers his best friend was the Lutheran pastor’s son. “I got a good grounding in religion,” he remembers, but admits, “I thought in those days that when I grew up I wanted to be a famous baseball player — the rookie of the year.”
Instead, he ended up in journalism, reviewing concerts and plays for the largest daily newspaper in Minnesota. His writing skills have been put to good use in the church over the years. He has written a half-dozen musicals that the youth of Diamond Lake Lutheran have staged each spring.
And, for the last three years, he’s been the energy behind “The New Frontier Lutheran Radio Hour.”
Readers who are curious to hear what a “broadcast” sounds like, short of actually visiting Diamond Lake Lutheran on a Sunday morning, can visit the church’s website, http://www.DLLC.org, and click on the link for the broadcasts. All of them have been archived and are available for listening.