A building block for resilience 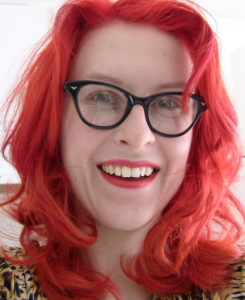 When I found the photograph, I was stunned. During my angsty teenage years, I, like millions of misfit kids, fantasized about being adopted. Although I have many characteristics in common with both my parents, I didn’t look exactly like anyone on either side of the family. This, combined with the common teenage sentiment that my parents just didn’t understand me, led me to wonder how on earth I could be related to these people.
In my early 20s, after I’d begun to realize that not only are my parents awesome, but I am indeed a lot like them, I came across the black-and-white photograph in an old album of my grandmother’s. The photo looked so much like me, I was stunned. My grandmother explained that the face in the photo belonged to my ancestor, Bertha Kirschbaum, who had emigrated from Germany in the early part of the 20th century.
I was fascinated. Just like the face in the photo was a reflection of mine, I am a reflection of my family history.

The stories of our youth

My dad is a storyteller, so of course we got to hear lots of family stories. Dad is a master at weaving tales, and his narratives of the shenanigans that he and my uncle got into as kids in south Minneapolis accompanied our dinnertime with as much regularity as dessert.

It is hard for your child to quantify that you, the parent who makes the rules, was once a kid, too.

The stories brought joy to our dinner table, but scientists say they may have a more tangible benefit. According to research conducted in the 1990s by Emory University psychologist Dr. Marshall Duke, people who know a lot about their family history are generally more resilient people. “The answers have to do with a child’s sense of being part of a larger family,” Duke related to author Bruce Feiler in the latter’s book, The Secrets of Happy Families, republished as a New York Times op-ed in March of 2013.
Duke and his colleagues asked kids a series of questions. Samples include “Do you know where your grandparents grew up?,” “Do you know the story of your birth?,” and “Do you know where your parents met?” He compared the results to a series of psychological tests they’d given the same kids.
“The more children knew about their family’s history, the stronger their sense of control over their lives, the higher their self-esteem, and the more successfully they believed their families functioned,” writes Feiler. In fact, the kids’ responses to the family history questions were the best predictor of psychological health.

In an article for The Atlantic, psychology professor Elaine Reese cites a battery of other studies that have given the same results. Children who heard family stories at home were more empathetic to others’ feelings, and were better able to provide complex narratives at young ages.
These benefits remained as the children were studied across years. “Family storytelling,” writes Reese, “can help a child grow into a teen who feels connected to the important people in her life.”
So how do parents begin relating family narratives? First, start early. Preschoolers might like hearing stories about scrapes you got into as a kid, funny pranks you might have pulled, the time that your parents got mad at you.
It is hard for your child to quantify that you, the parent who makes the rules, was once a kid, too. Talking about your childhood can help your child feel like you understand them.
Duke found that the healthiest family narrative isn’t one that is all happy, or all sad; rather, kids benefit most from what Duke calls an “oscillating family narrative,” where the child hears about the ups and downs, the good and bad that has happened to the family over the years.
Grandma might have run her own successful business, but there is the relative who is incarcerated, and another who was injured. Kids are given an example that every life has good parts and bad parts, but the family stuck together, and stuck it out. These are lessons they will take with them into adulthood.
Imagine that!