Cabin fever? Get outta here — and/or read that Book on your bed stand. Two archaeological excavators look for artifacts by sifting soil from a church in the mountaintop
Decapolis city of Hippos in 2006. In the background is the Sea of Galilee.Photos by Marc Hequet

If you’re going to travel, where better than the Holy Land? Or would it be better to go to Germany, where the Lutheran Reformation took root? Or would a day trip to visit country churches, where the Lutheran faith spread to a new continent, be more fulfilling? Or, for that matter, if you’re not going anywhere, how about reading a great travel book — the Bible?
More about all of which follows. In short, here are ideas for the cabin-fever crowd. Dream a little.

Germany is preparing for an influx of tourists observing the 500th anniversary of Martin Luther posting his 95 theses in 1517 at the Castle Church in Wittenberg. If you go anywhere near that eastern German town, which until 1989 was behind the wall between the then-two Germanys, don’t miss these side trips:

* Eisleben is Luther’s birthplace and the place where he died in 1546. Most of his activities were in or near Wittenberg, but key Luther sites have been preserved in Eisleben, including the house where he was born and the house where he died. You can also see the church and baptismal font where he was baptized. With a longer walk, you can visit the beautiful small church, St. Anne’s, where he preached. Eisleben, 75 miles from Wittenberg, is not connected to the German high-speed rails, but a slower regional train will get you there.

* Torgau is where Katharina von Bora, the former nun who married Luther, is buried. She fled Wittenberg following Luther’s death. Torgau is also home to Hartenfels Castle. If we fast-forward four centuries, this castle overlooks the Elbe River bridge where, in a moment of great historic importance, American and Soviet Allied forces greeted one another in April 1945 near the conclusion of World War II.

* Leipzig hosts another remarkable moment in history. The movement to bring down the wall dividing East and West Germany had among its origins a peaceful protest at St. Nikolaikirche (St. Nicholas church) in Leipzig, which hosted Monday night candlelight in protest to oppression. There are reports of the rekindling of Christianity beyond the fallen wall in areas formerly controlled by communism.

Leipzig is also known for the former organist at St. Thomas Church, one Johann Sebastian Bach. His museum is next to the church. And here also is the castle Pleissenberg tower — all that remains of the castle of Duke George, who opposed Luther bitterly. When Duke George died, his son and successor invited Luther to preach at the Pleissenberg church. Luther’s peacemaking Pleissenberg sermon assured his now-Protestant listeners that they most certainly were still Christians. Luther called for unity and reconciliation. For more information, visit www.Germany.Travel.

If you visit the Holy Land, you will likely tour Galilee. If you do, the ancient city of Hippos is very memorable, including the climb. This footprint of a nailed shoe worn by a Roman soldier is preserved in plaster along the south wall of the city of Hippos.

Eisleben, 75 miles from Wittenberg, is not connected to the German high-speed rails, but a slower regional train will get you there.

Hippos? Not mentioned in the Bible. It’s a city of the Decapolis, and the closest we come to Bible reference is with the demoniac in Mark 5. The man possessed by demons was a man of a city. He lived among the tombs. He would have been able to see the boat arriving with Jesus and his followers. If you climb the quarter mile or so to enter the city’s east gate, you will pass the tombs among which the demoniac may have dwelt. The going is rugged. The demoniac cut himself with stones, says Mark. On these hills, he needn’t have done that on purpose. Running, or even walking, on the steep, rocky inclines would have sufficed.
Yet it’s a climb worth the effort. Hippos is a remarkable site, perfectly preserved by a violent earthquake in about A.D. 750 that destroyed its churches and other buildings. It was first Greek, then Roman, and finally Christian, with several churches. More is available at hippos.archaeology.csp.edu/.
Mark Schuler, who teaches theology at Concordia University in St. Paul and who has excavated at Hippos and elsewhere and toured the Holy Land for years, suggests these additional sites in Galilee, which may be little noted in tourist literature:

* Mount Berenike, above the city of Tiberias, is the point at which weary pilgrims for centuries finally saw the Sea of Galilee. The view is stunning. The big lake’s surface is nearly 700 feet below sea level, part of the Great Rift Valley, a remarkable cleft in the earth’s crust that includes the Dead Sea and extends 2,000 miles into Africa. 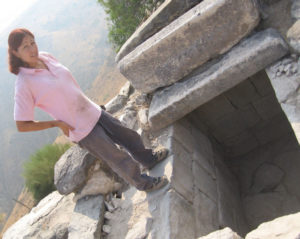 An excavator stands over a tomb at the city gate of Hippos in the Holy Land.

The Bible is an amazing travel account, in which everybody is always going someplace.

* Chorazin, on the northern shore of the Sea of Galilee near Capernaum, is the type of small community through which Jesus passed in his early ministry. The village synagogue’s Byzantine-era basalt construction “gives a good sense of the Galilean village life” that provides a context for the ministry of Jesus, according to Schuler. At Chorazin, Jesus wasn’t impressed. “Woe unto thee, Chorazin!” he says, “for if the mighty works, which were done in you had been done in Tyre and Sidon, they would have repented long ago in sackcloth and ashes.”

* Megiddo, a remarkable site of deep history, most recently has yielded a Christian church, possibly not open yet to the public. The church is unusual for its central sacramental table, Schuler reports, as well as mosaics depicting Jesus himself.

And closer to home

Finally, some extraordinary travel destinations are much closer to home:
Country churches are ever a diversion for anyone on a drive through the countryside. Just find your way to the steeple. If the place is locked and no one is around, go to the cemetery. Every marker tells a story.
Luther Seminary in St. Paul offers its Lay School of Theology classes each winter or spring. For more information on Luther’s theology courses, visit www.luthersem.edu.
The Bible. If you’d rather not go out at all, pick up that book on your bed stand. It is an amazing travel account, in which everybody is always going someplace. For context, consider Oxford Companion to the Bible. The online version is particularly useful for looking up just about anything in the Bible.