He Qi and Exultate share passion … for art and faith 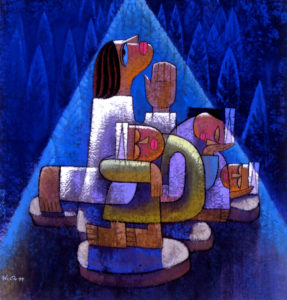 He Qi’s Garden of Gethsemane, 1999, is one of his many interpretations of the story of Holy Week.

Music and visual art can be a powerful match. We see it all the time in the movies and on TV. In person, it is more powerful still. When you add the element of Christian faith, the mix becomes infinitely richer.
The musical organization Exultate used this approach in a sequence of concerts March 7-9, combining the work of J.S. Bach with the distinctive images of He Qi (pronounced “Hah Chee”). Exultate exhibited paintings by the Chinese artist, now living in Roseville, during three Lenten performances of Bach’s St. John Passion in the Twin Cities. He Qi was present as well.
Music and images together “get to the hearts of the people who are listening,” says Exultate conductor and founder Thomas Rossin.

Passion in music and the fine arts

He Qi’s richly textured paintings show familiar scenes from the Bible. According to his website, his art is “a reinterpretation of sacred art within an ancient Chinese art idiom.”
Rossin approached the artist about showing some of his work during an Exultate performance, seeking images that pertained to the passion of Christ. He Qi, says Rossin, “was thrilled to be involved.”
Six He Qi paintings were on exhibit at the front of the hall during each performance. Attendees could look at the paintings closely before and after the performance, and for $10 could buy 16- x 20-inch prints of them.
Music and visual art in combination make perfect sense, Rossin says — particularly in a Christian setting, and particularly in the context of the passion, the most moving, the most emotional parts of the Jesus story. “It adds tremendously,” says Rossin. “Not only are you hearing the words of Christ but seeing them from an artist’s viewpoint.” “Not only are you hearing the words of Christ but seeing them from an artist’s viewpoint.”

Exultate, based in Eagan, is the nation’s only combined chamber orchestra and choral group. Instrumentalists and vocalists rehearsing regularly together allows careful shading of instrument and voice, says founder Rossin. The group performs at venues around the Twin Cities.

He Qi, who came to the United States in 2004, was among the thousands sent out of cities during the so-called Chinese cultural revolution of the late 1960s. He was able to avoid hard physical labor by painting pictures of chairman Mao Zedong, then leader of the Chinese communist party.
According to his website, in those years the artist once found a copy of Renaissance artist Raphael’s Madonna and Child in a magazine, “and was so moved by it, that he began to paint copies of it at night.” He Qu’s Peace Be Still

He Qi studied medieval art in Germany at Hamburg. Back in China he completed a doctorate in religious art at Nanjing Art Institute. He served as a professor of Christian Art at Nanjing Theological Seminary before moving to Minnesota in 2004. His work has been exhibited in Asia, Europe and the United States, including at Luther Seminary in St. Paul. See more of his artistic offerings at www.heqigallery.com.
Exultate’s next performances are May 9-11 with a different kind of visual — flowers. The group bills it as a performance in memory of loved ones. The price of admission includes a bouquet of cut flowers and booklet about how to deal with grief. The music will be by Morton Lauridsen, a California-based contemporary composer.
In this performance, the visual will be the flowers. Afterward attendees can take them home. For more information about Exultate, visit http://exultate.org.