‘How sweet the sound’ of supporting justice

Lutheran Volunteer Corps supporters will run a “race” to raise funds for this faith-based organization that brings primarily young people to urban centers to work for social justice agencies, to live in intentional communities, and to experiment with a sustainable lifestyle.

Borrowing a theme from one of the reality shows on television, the Lutheran Volunteer Corps (LVC) will be conducting its first-ever Amazing gRace fundraiser Saturday, April 26, in the Twin Cities. Participants will begin in St. Paul and end up at Redeemer Lutheran Church (ELCA) in north Minneapolis for a gala celebration.
At the start of the race, each team of two participants will receive a specified small sum of cash along with bus and light rail schedules, and additional instructions. They will have 20 minutes to plan their route, including stops at nonprofit placement sites where current LVC members work.
In addition to the traditional motivation to raise funds, the Amazing gRace is on opportunity to make connections with the broader community and to educate the general public about Lutheran Volunteer Corps. Among those expected to participate are LVC alumni, other volunteers and staff, and board members of LVC.
Although the race is expected to take about five hours to complete, speed is not the only quality on which judging will occur. Participation in projects at various sites, such as Habitat for Humanity, is also included. The scavenger-hunt fundraiser will also take participants through sites such as social justice landmarks, partner congregations, and homes where LVC members live during their year of service. There will be “incentives” that teams can earn to increase their overall score.
Even before the event, there is a challenge: Each team of two is expected to raise a minimum of $1,000 in order to participate. Teams get to specify where $250 of that money goes; if they raise more than the $1,000 there is a graduated scale on the amount the team can designate to a specific cause. 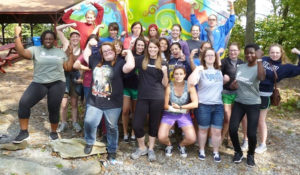 they aren’t afraid of physical or spiritual challenges.
Photo provided by Amy Sutter

At the gala event at Redeemer Church, three teams will be awarded cash prizes. Winners get to donate their cash prizes to the LVC placement organization of their choice.
The Twin Cities event is a showcase on what is hoped to become a series of such fundraisers across the nation in the future, according to Amy Sutter, director of development for LVC.

A community of service

The Lutheran Volunteer Corps is a national servant-leadership organization that unites people to work for peace with justice. Volunteers receive a stipend for housing, transportation, and health insurance as they live together in intentional community, and work for social justice organizations all while practicing a simple, sustainable lifestyle.
LVC provides faith-based organizations the opportunity to have a fulltime employee with a college degree at a fraction of the cost of the usual employee. LVC currently has 18 people living at three locations and working with Twin Cities organizations. LVC alumni in the Twin Cities number about 280 persons, many of whom followed their year of volunteering with careers as fulltime workers in social justice causes.
From its founding in Washington, D.C., almost 35 years ago, LVC has expanded to 14 cities in the United States. Other cities where LVC operates are Wilmington, Delaware; Berkeley, California; Oakland, California; Baltimore; Atlanta; Chicago; Milwaukee; Omaha, Nebraska; San Francisco; and Seattle and Tacoma, Washington. LVC has operated in the Twin Cities since 1991. For those wanting more information about LVC, visit its website at www.lutheranvolunteercorps.org.
For more information about the Twin Cities Amazing gRace fundraiser, contact Amy Sutter at asutter@lutheranvolunteercorps.org or her associate Elodie Lee at elee@lutheranvolunteercorps.org. Sutter may also be reached by phone at 612/280-3239.