One of the architects of the Civil Rights struggle in the United States since the 1960s offered the Martin Luther King Jr. Memorial Lecture at Gustavus Adolphus College, St. Peter, Minnesota, on January 20, 2014. The lecture is held annually on the Martin Luther King Jr. Holiday.
Diane Nash belonged to King’s inner circle of advisors in the early ’60s. Attracted to the movement by the Rev. James Lawson as a new college student at Fisk University, she shared Lawson’s enthusiasm for Mahatma Gandhi’s theories of active nonviolence.
“I was a lucky woman, just at the right place at the right time,” she told Gustavus students. Not from an especially political family, she happened into a lecture by Lawson at Fisk and left the school after that semester to join with other leaders at the Southern Christian Leadership Conference, the civil rights organization headed by King.
As a young person in the movement, King assigned her the task of engaging her peersPart of that strategy included preparing young people to conduct sit-ins at segregated southern lunch counters. In order to organize for a sustained struggle, Nash and her husband James Bevel organized the Student Nonviolent Coordinating Committee.
At Gustavus, she distinguished the active nonviolence of the Civil Rights movement from a more passive pacifism. She said the Civil Rights Movement used “agapic energy,” referencing the Greek word for perfect love (agape), rather than brotherly love (philia) or erotic love (eros).
She contended that “people acting in a concerted, coordinated manner can exert their love energy … in an effort to make social change.” She believes that “agapic energy” is a positive way to talk about nonviolence.
Nash challenged students to bring this agapic energy into work for social change on whatever issues they care about. She encouraged, “Exert your leadership within your community, and stop cooperating with things you know are wrong.” 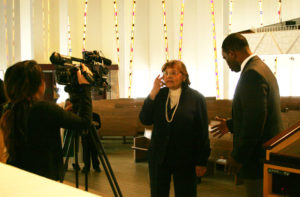