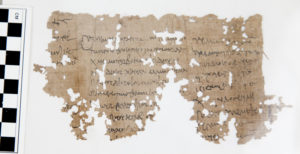 This fragment of 1st Century papyrus was recently discovered by a work study student in the Orlando W. Qualley collection at the Luther College Archives, housed in the school’s library. Photo provided by Luther College

Most student work-study jobs are a bit of a grind. But in January, nine papyri documents almost 2,000 years old were discovered by a student in the Luther College library archives, where they had remained hidden in a cardboard box for decades.
Luther sophomore Brittany Anderson, a double major in biology and anthropology, was conducting a routine inventory of the papers of the late Orlando W. Qualley, longtime professor of classics and dean of the college, when she came across the nine ancient documents among Qualley’s letters and journals donated to the college in the 1980s. The papyri — one of which, a libellus, is especially rare — date from the first to the fifth centuries A.D. and were apparently purchased by Qualley from an antiquities dealer when he was part of a University of Michigan archaeological excavation team at Karanis, south of Cairo, in 1924-25.
“Luther College is incredibly fortunate to have in its possession the Qualley papyri, especially the libellus, a rare and invaluable find from the early centuries of Christian history,” said Philip Freeman, Qualley Chair of Ancient Languages at Luther. “As soon as they are properly preserved, we hope to display all the papyri in our library for everyone to see. They provide a great opportunity for our students to examine a genuine piece of the ancient world.”

The stories papyrus can tell

A federal grant awarded to Luther College and the Vesterheim Museum in 2010 provided funding to create an online catalogue to increase access for scholars around the world. Although the funding has since ended, the project continued. As part of her work-study, Anderson was doing an inventory of boxes received in November 1986 when she came across the papyri. “It was exciting; I knew I had come across something interesting.” 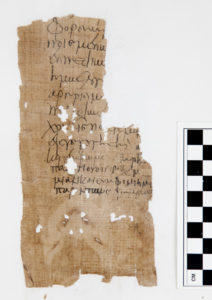 This papyrus fragment was discovered in a plastic bag inside a book that had been packed in a box of the Luther College Archives.

The papyri date from the first to the fifth centuries A.D.

“Finding these fragments met the goal of this [cataloguing] project,” Sasha Griffin, college archivist, told Metro Lutheran. “They join other significant materials, including, specifically, the Norwegian Lutheran collections, as well as papyri donated to the rare book collection of the library in the 1970s.”
The nine papyri of the recent discovery, written in ancient Greek, measure from 5 to 20 centimeters in length and are in remarkably good shape, though all are fragmentary and quite fragile. Papyrus was the primary writing medium of the ancient world and was made from the interwoven fibers of the papyrus plant, which grows along the banks of the Nile River.
Upon finding the documents, Anderson contacted the Luther Classics Department faculty, who examined the papyri and in turn contacted the Papyrus Collection staff at the University of Michigan, one of the leading centers of papyrus study in the world, for help in identifying and analyzing the discoveries. Several are accounting documents, but papyrologist Graham Clayton immediately identified one as a libellus dating from the first great Roman persecution of Christians beginning under Emperor Decius in the year 250.
Decius issued a decree that year ordering all inhabitants of the empire to offer a sacrifice to the gods as a show of loyalty. A libellus was a document given to a Roman citizen to confirm the performance of such a sacrifice. Christians were forbidden by their beliefs from performing these sacrifices and were thus subject to arrest, torture and execution for refusing to obey the emperor’s decree. Pope Fabian was among those who refused to sacrifice and was subsequently killed by the Roman authorities.
The Luther College libellus bears the name of Aurelius Ammon, a servant of the well-attested Aurelius Appianus, a leading citizen of Alexandria, Egypt. It declares that Aurelius Ammon has sacrificed “in accordance with the orders” of the emperor. The papyrus was probably part of a collection made in ancient times from the village of Theadelphia in Egypt’s Fayum region. Only a few of these rare documents have been uncovered, and they are currently housed in research libraries in Hamburg, Berlin, Manchester, Florence, and the University of Michigan. Now, Decorah, Iowa, joins the list.
Luther College is receiving estimates for the cost of preserving all the Qualley papyri and making them available online in digital format. “Ideally, they would be put on exhibit” at Luther, said Griffin. The items will be integrated into teaching in both the classics and museum studies concentration programs. “The archives [at Luther] are quite good for a college our size,” Griffin added.