There is no standard procedure

Choosing a district president or a synod bishop is not something Lutherans take lightly. The consequences can be significant — even fateful — for the fortunes of a denomination.
The first spiritual leader of the Lutheran Church—Missouri Synod (LCMS) was a bishop who went astray and nearly destroyed the fledgling denomination. He was deposed and replaced with Dr. C.F.W. Walther (who wasn’t called a bishop, partly because of that unhappy experience).
Sometimes the selection of a new spiritual leader catches everyone off-guard — including the successful candidate. At its last churchwide assembly, voting members of the Evangelical Lutheran Church in America (ELCA) surprised themselves by failing to re-elect the incumbent (who had made himself available for re-election) and, instead, chose their first-ever female bishop. When she spoke to the press after her election, the Rev. Elizabeth Eaton declared that she had agreed to allow her name to be placed in nomination in order to expand the conversation about mission and ministry, but quipped, “And then things just sort of got out of hand.” 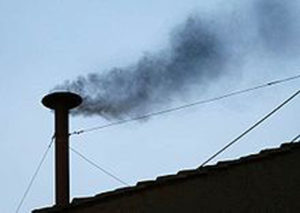 Black smoke from a chimney in the Sistine Chapel announces that two-thirds of the Papal Conclave did not agree on a future pope for the Roman Catholic Church. Image in the public domain

Lutherans, like all Christians, extending back to the beginning of the worldwide faith community, have struggled to find authentic ways to discern God’s will — especially when it comes to selecting leadership. Perhaps the first time the challenge was faced was the day the remaining 11 disciples of Jesus took steps to replace Judas Isacariot, who had ended his own life.
Careful readers of the New Testament Book of the Acts of the Apostles are sometimes surprised — appalled, even — to discover that the method used to select Matthias as their new “number 12” was by casting lots. Nobody knows exactly what happened, but it seems clear that some sort of game of chance was used (not unlike the one used by the soldiers at the foot of the cross, who cast lots in order to decide who among them would win possession of Jesus’ seamless robe). It might have involved the roll of dice or the flip of a coin — or something else altogether.
How does casting lots help to discern the will of God? The writer of Acts doesn’t explain that. But the important thing in that case was that those involved trusted God to be at work in the process. The same confidence has guided every method Christians have used since (including entrusting a room full of Roman Catholic cardinals with the task of picking one among them to be the spiritual leader of that denomination).

‘Lots’ of ways of choicing a leader

Lutherans in the geography served by Metro Lutheran do not use uniform processes to select their presidents and bishops. (They do agree about one thing: none of them prefer to cast lots when making the choice).
A survey of the several constituencies in Minnesota and western Wisconsin reveals some interesting patterns.
Three of the Minnesota synods of the ELCA surface candidates for bishop at conference conventions. Minneapolis Area, St. Paul Area, and Southwest Minnesota synods all follow this pattern. In the two Twin Cities area synods, a conference may nominate three candidates to be included on the assembly ballot. In the Southwest Minnesota Synod, conferences may nominate five individuals.
The ELCA’s Southeastern Minnesota Synod, along with both Minnesota districts of the LCMS, take a more grass-roots approach. For Southeastern Minnesota ELCA and the LCMS Minnesota South and North districts, congregations are invited to send nominations forward, one from each parish. In the case of the first two judicatories, the names go through a filtering process, with a list of finalists submitted to the synod assembly or district convention. In the case of LCMS Minnesota North District, the top ten nominees from congregations are sent directly to the convention.
The Minnesota District of the Wisconsin Evangelical Lutheran Synod (WELS) and the ELCA’s Northwest Synod of Wisconsin both use an ecclesiastical ballot. That means any pastor in the district or synod may be nominated at the convention. A winnowing process then ensues until a finalist is chosen.
Perhaps the most democratic process of all is practiced by members of the Association of Free Lutheran Congregations (AFLC). The president of this church body is elected by voting delegates to a convention at which any member in good standing of any congregation may vote.
The ELCA synods serving Minneapolis, St. Paul and Southeastern Minnesota, along with the Northwest Synod of Wisconsin, have two-term limits for bishop (six years each term). There are no term limits for the LCMS and WELS districts, nor for the ELCA’s Southwestern Minnesota Synod.
Is one method of selecting a Lutheran church leader better than another? It’s hard to say. Each approach has its advantages and its drawbacks. No matter which system is employed, the intent is always the same — to work in accordance with the New Testament formula, “It seemed good to the Holy Spirit and to us.” That implies a healthy mix of faith, hope, good will and charity on the part of all involved.

When voting members of the ELCA’s St. Paul Area Synod (SPAS) gather in May, they will elect a new bishop. But they will also bid farewell to a long-serving church leader. The Rev. Peter Rogness, who has served SPAS for the past 12 years, and is term-limited, will retire on July 1. It has been a long run and a consequential ministry for Rogness, beginning with his 1973 ordination. A pastor in Milwaukee, his second call was to a predominantly black congregation on the city’s north side. It was an early introduction to the challenge of matching parish ministry with social justice.
Three times a bishop, he led The American Lutheran Church’s Southern Wisconsin District and the ELCA’s Greater Milwaukee Synod before serving as bishop of the SPAS.
During his service in St. Paul, Rogness did seminal work in ministry addressing wealth inequality. He authored the 2004 document A Common Foundation: Shared Principles for Overcoming Poverty. It shaped the synod’s efforts to end poverty and has been endorsed by over 30 ecumenical leaders across Minnesota.
Rogness told Metro Lutheran the anti-poverty initiative was one of the key accomplishments during his time in St. Paul, pointing out that he inherited the effort. The synod had committed itself to such work before his arrival. Still, his energy gave new life to the work.
“The economy wasn’t doing very well,” he recalls. “Government was pulling back. There was a threat to vulnerable people. Social programs were being cut. [In the midst of all of that] we were able to advocate for the poor.”
It was an important initiative, he stresses. “We were a catalyst for wider ecumenical work. That was a very good thing.”
Part of that cross-denominational partnership took the form of ecumenical work with the Roman Catholic Archdiocese of St. Paul and Minnesota, and personal interaction with then-Archbishop Harry Flynn. It resulted in significant positive legislative response on the part of the state legislature.

The former president of Concordia University, an LCMS school in St. Paul, has an intimate recollection of Rogness’ tenure. Says Dr. Robert Holst, “Bishop Peter Rogness and I have co-hosted a regular share-care-and-prayer breakfast for the 12 years of his St. Paul Synod bishopric. We invited five LCMS and five ELCA church servant-leaders to discuss vision, methods, challenges, and blessings of urban mission and ministry.”
Rogness’ evangelical experiences, nature, and faith, says Holst, “promoted and supported insightful discussion of current issues as well as open and honest theological sharing. His willingness to explore complex issues openly showed a true servant leader’s heart and skill that freed us all to move outside the perimeters of church politics into the context of biblical exploration and interpretation.”
As he prepares to step away from the bishop’s office, Rogness identifies a couple of sobering challenges yet to be addressed.
“We need more clearly to reflect the society of which we are a part,” he says. “We are still predominantly white and Northern European. That’s a very nice group of people, but our neighborhoods don’t all reflect that. We need to break out of our narrowly-defined identity. That’s a big challenge.”
And, there’s the challenge of post-Christendom. “We used to be the cultural mainstay. That’s not the case anymore. Now people are drawn into faith communities because they sense something that makes them more alive. We need to be authentically living in the new context. That’s not just true for Lutherans, by the way. It’s a challenge for all Christians.”
After his retirement in July, Rogness says he will not be looking for another call. “I’m old enough to retire,” he says, adding somewhat whimsically, “I’ll wait to see what God and my wife have in mind for me to do next.”
—Michael L. Sherer